One of the things I obsessively collect in my cooking life — aside, apparently, from container lids with no bases and jars of mustard seeds because every time a recipe requires it I presume I’m out because of that one time in 2010 I was — is recipes with very short ingredient lists. It’s not revolutionary to learn that, say, a salad can be made with just lettuce, oil, and vinegar or to find tomato bread, or basil pesto on these lists, but Marcella Hazan’s 3-ingredient tomato sauce is indeed something pretty revelatory, especially when you’re short on time to go to the store or merely patience to cook. So is this Minimalist Barbecue Sauce, Bacon Corn Hash, this summer squash pizza topping that could convert anyone to zucchini, and if does not, this Quick Zucchini Sauté will, the omelet that’s basically Spain’s national dish (and mine), and let us never forget all of the magical things that happen when you let fresh raspberries, brown sugar, and sour cream blister under a broiler, or roast a sweet potato until it almost candies itself inside. It’s not fully populated (I keep finding things I’ve missed and taking liberties when the 6th ingredient is butter or olive oil) but I finally got to pulling together a few of my favorites in this collection this summer. Life is busy; it’s here to help. 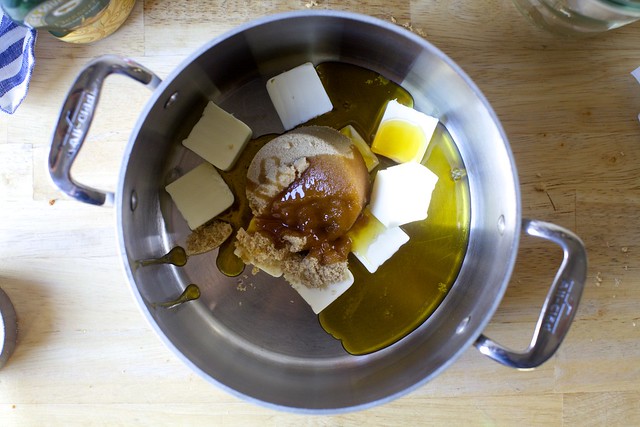 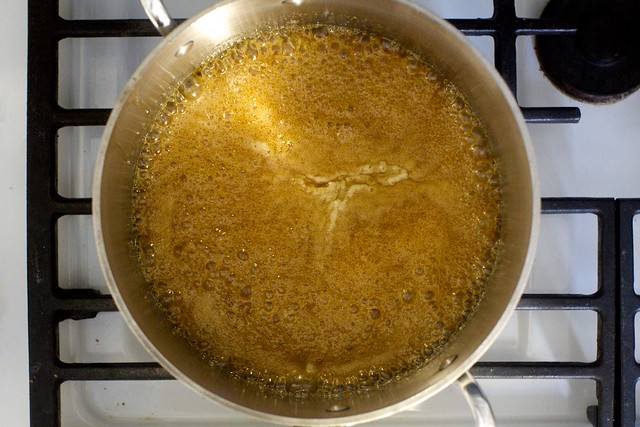 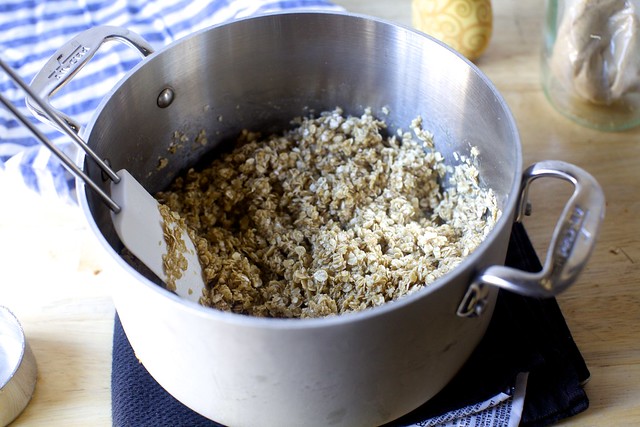 Despite all of this, I am a deeply contradictory person. While I assure you that these recipes don’t require any more ingredients than listed to fulfill their delicious destinies, if you were to try to tell me about a recipe with a set number of ingredients, I’d immediately bristle at the limitation. “What was the 6th one? Maybe I have it! I really don’t mind taking it out!” 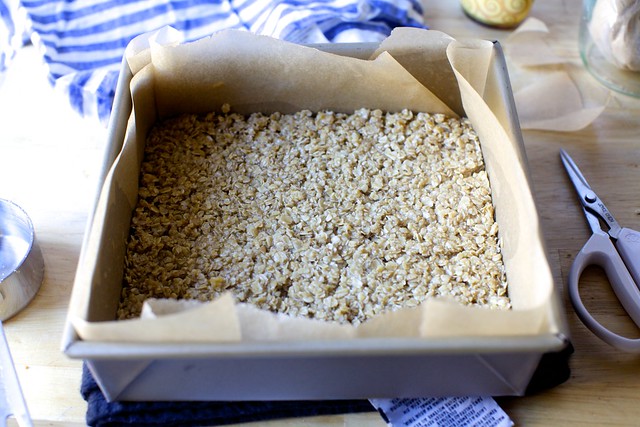 Regardless, today’s recipe is a long-overdue entry into the high reward for low ingredient count category. Stateside, confusingly, flapjacks mean pancakes but in UK, flapjacks are something completely different, a tray-baked, soft-centered, chewy, crunchy-edged caramel-scented bar made only with oats, golden syrup, brown sugar, and butter*. If they are not already, we need these in our lives. They’re considered the quintessential teatime treat; alas, I don’t have a whole lot of teatime in my life but I do have hangry schoolkids that require nut-free snacks and that these are also gluten-free and ridiculously quick to make (you’ll memorize the recipe after the first time you make them) means that they’ve been on repeat here since the school year began. 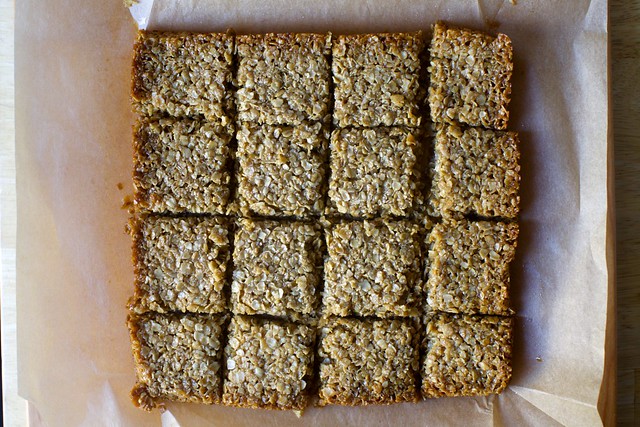 “But Deb, flapjacks have only 4 ingredients. What’s the 5th? I might have it!”

Fair enough. I added chocolate. Does it *need* chocolate? For once, I’m totally torn; they’re outstanding either way. 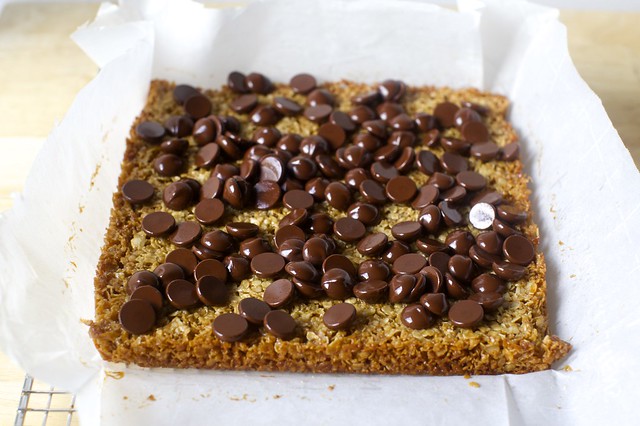 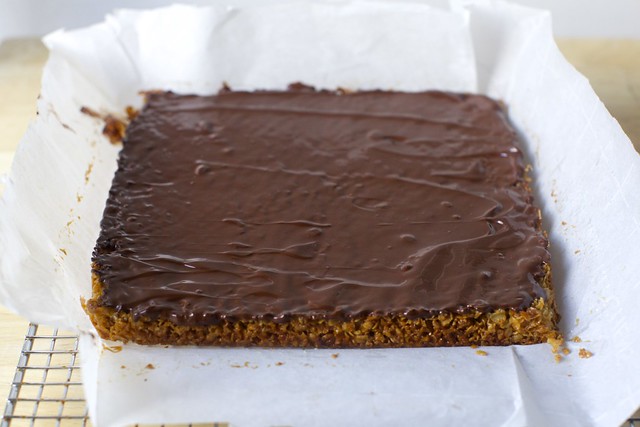 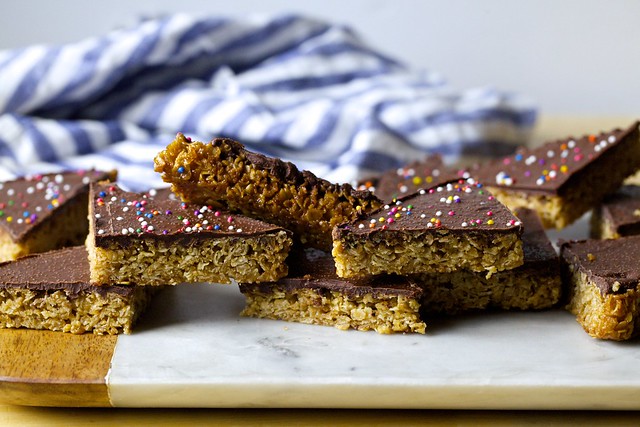 * Although if Queen Mary Berry said marg-reen was okay in 1974, who am I to argue?

And for the other side of the world:
Six Months Ago: Luxe Butterscotch Pudding
1.5 Years Ago: Butterscotch Pie
2.5 Years Ago: White Russian, Everyday Meatballs and Roasted Yams and Chickpeas with Yogurt
3.5 Years Ago: Spaghetti Pangrattato with Fried Eggs and The ‘I Want Chocolate Cake’ Cake
4.5 Years Ago: Morning Bread Pudding with Salted Caramel and Kale and Quinoa Salad with Ricotta Salata

Golden syrup — picture corn syrup, but made with cane sugar and lightly cooked for a caramel-y vibe — is a central flavor in flapjacks, which is frustrating as it can be hard to find in the U.S. (Although Amazon sells it in many sizes, including the one I keep around.) (It’s also my favorite thing to put in pecan pie instead of corn syrup, if you need more convincing to pick some up.) I didn’t test the flapjacks with maple syrup but aside from it being thinner, I think it would work decently well as a substitute, as would honey, but only if you love the flavor because it will absolutely come through.

I found that quick-cooking oats (1-minute, not instant) work best here, holding the bars together better than old-fashioned rolled oats did. If you only have them, pulse them a couple times in a food processor to chop them down a little. Instant oats made the bars too tightly packed for my tastes. If you’re serving these to anyone with gluten sensitivities, make sure the oats are labeled gluten-free.

The base recipe here is, I think, lovely — simple, rich, sweet but somehow not excessively so for a treat, and definitely syrupy, a term that makes absolute sense once you bite in. They smell like caramel as they bake. Still, you could tweak the flavors more ways than I could list on two internets. Here are a few to get you started: replacing 1/4 of the oats with an equal weight of dried coconut, adding finely grated lemon zest, ground or candied ginger, ground cinnamon, dried fruit such as dates or figs, or even adding chocolate chunks. The only thing to consider is that the single biggest complaint I read in reviews of other flapjack recipes (but didn’t experience in a way I found problematic) is that the bars are crumbly (which, of course, with so little holding them together) and imagine that adding more chunky ingredients would further this.

Heat oven to 325 degrees F. Line an 8×8-inch baking pan with parchment paper. In a medium-sized pot, melt butter with brown sugar, golden syrup, and a few pinches of flaky sea salt (omit if using salted butter) together over medium-high heat. Once bubbles form, simmer for one minute, then stir in oats off the heat. Spread in pan in an even layer and baked bars for 20 to 25 minutes, until deeply golden at edges. (Deeply golden bars have much more of a caramel-y flavor than pale ones.)

Every flapjack recipe on the internet tells you to cut them while they’re still warm or it’s too difficult later but I found them messy to cut while warm and really easy to cut cleanly once cool with a sharp, serrated knife, so I’m going to suggest you cut them once they’re fully cool. Use the parchment paper to slide them out of their pan onto a cutting board and cut them into 16 squares or into 4 large ones, then cut quarter diagonally to form 4 triangles.