I am never a better citizen of the sidewalks of New York than I am when I have a newborn, or at least the variety we’ve been assigned twice now: those that can only be calmed by long walks in the stroller. And so we stroll, even though it’s unforgivably hot out, even though we rarely get out of the apartment early enough to enjoy those brief parts of the day when there’s an actual shady side of the street to hover on, even though we really don’t need anything else from the Greenmarket or anywhere else, we make up excuses so we have somewhere to go. On the best of days, we see people that we know and the neighborhood feels like something out of Mr. Rogers (although his is notably absent of the guy who yells outside my apartment all day about his superstitions and the clouds of secondhand decriminalized smoke we wade through). We bumped into my son’s old preschool teacher a few weeks ago, someone who likes to cook almost as much as me, and she said she’d recently made a big batch of caponata and had been having it with everything — for breakfast with an egg, in sandwiches for lunch and even with pasta for dinner and I thought that sounded absolutely brilliant. I just needed to learn how to make caponata. 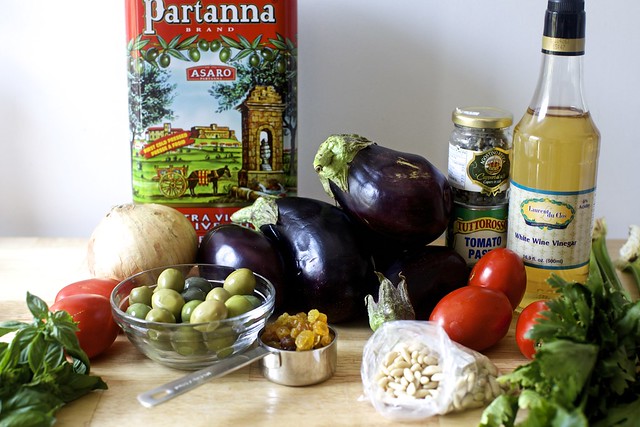 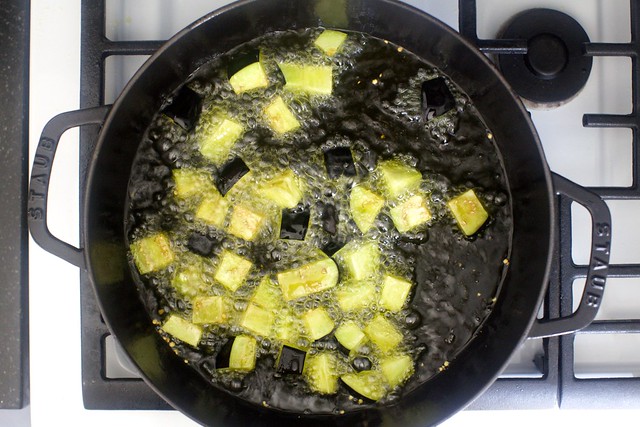 I read a lot and I learned several things about this eggplant dish. First, definitely don’t try to exhaust yourself by finding a one/true/authentic version. Just about all are authentic and true and few match, because everyone makes it the best way they know how and that’s usually the way their grandmothers made it and you have to be out of your mind if think I’m going to argue with a Sicilian grandmother. However, I knew a few things: I knew that while I am completely okay with frying eggplant the authentic way that it’s totally cool if you’d like to just roast or sauté it. I wanted to stick to a core list of ingredients — eggplant, onion, celery, tomato, capers, olives, raisins, basil and pine nuts — because while you can add a whole lot of things — i.e. garlic, zucchini, sweet or hot peppers, anchovies — I had a hunch there’s enough going on in the flavor department with the core list that it wouldn’t need much more to taste good. 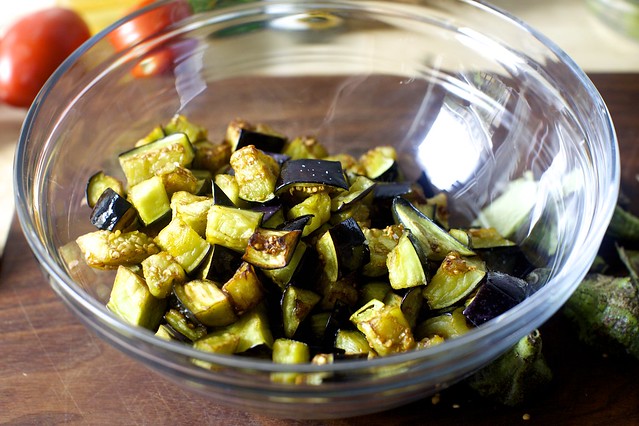 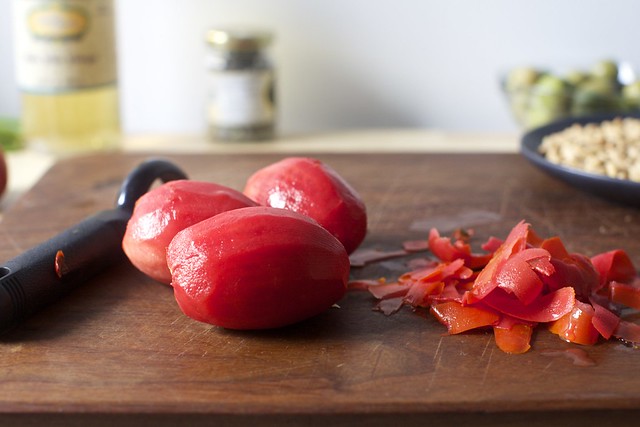 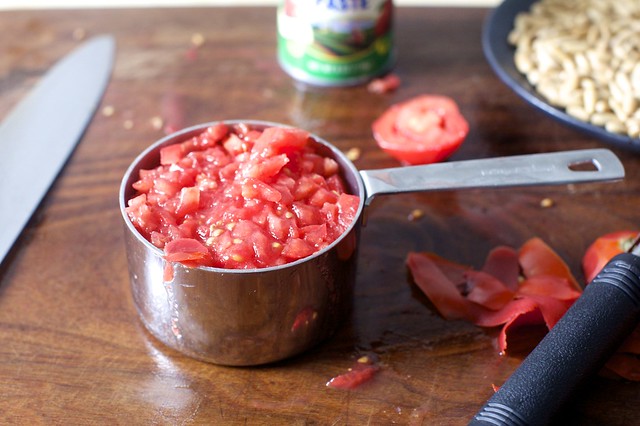 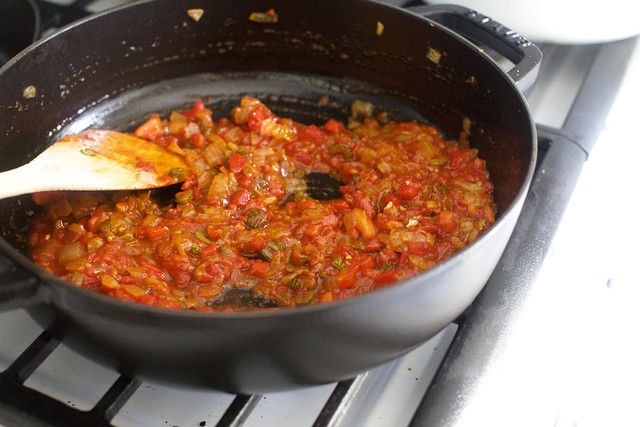 Finally, I wanted it to be truly and completely tangy. A good caponata is like a sweet and sour eggplant jam, or even a pickled Mediterranean compote, with both crunch and softness. The disappointing ones have an oily mouthfeel and no bright, dynamic flavor to back them up. When you have a good one, you’ll want to immediately dollop it on toast, or as we’re currently hooked on doing, nestling it against a thick slice of good, soft mozzarella on a slice of wholegrain bread. I wish all of my aimless wandering led to meals this good. 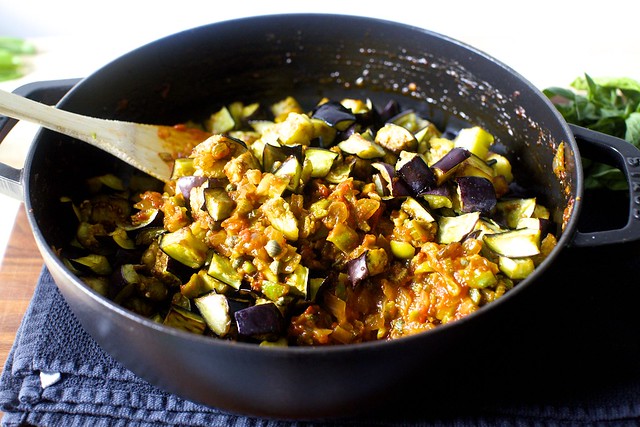 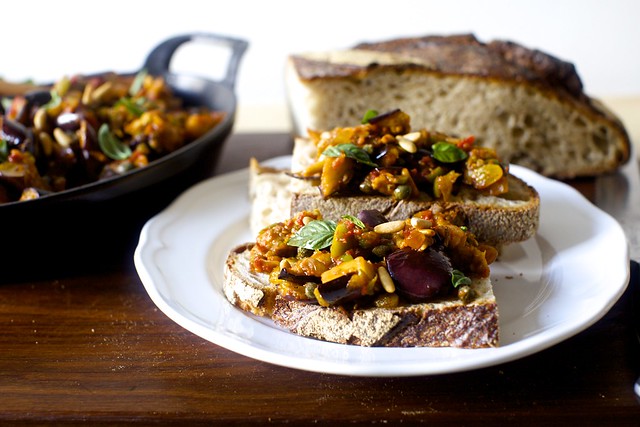 And for the other side of the world:
Six Months Ago: Cornmeal-Fried Pork Chops and Smashed Potatoes
1.5 Years Ago: Kale and Quinoa Salad with Ricotta Salata
2.5 Years Ago: Multigrain Apple Crisps
3.5 Years Ago: My Favorite Buttermilk Biscuits

Caponata
Adapted, just a little, from this excellent Saveur recipe

I am a heathen (!) who rarely salts my eggplant, which generations of eggplant-cookers swear improves its texture and fry-ability. I don’t find it necessary to get a good flavor (less bitter, is the argument) or texture and laziness wins. But, should you wish to, simply toss your eggplant cubes with a teaspoon or two of coarse salt in a colander and let it sit/drain for 30 minutes and up to 2 hours. Press out as much extra liquid as you can, then spread the eggplant out on a paper towels to dry it as well as possible before continuing with the frying step. Then feel free to tell me what I’m missing.

If you cannot bear to use canned crushed tomatoes when fresh ones are so good, feel free to chop your own plum tomatoes very well until you reach 1 cup. I peeled mine first (I use this when I just have one or two and don’t want the extra step of blanching) and squeezed out most of the seeds for a more canned-like texture.

In a large skillet (12 inches is ideal), heat oil over medium-high heat. Once very hot, working in batches, fry eggplant cubes in one layer at a time, stirring and turning occasionally until golden brown, about 3 to 5 minutes. Use a slotted spoon to drain eggplant over skillet, then transfer to a paper towel-lined plate and immediately season with salt. Repeat with remaining eggplant. Transfer drained and mostly cooled eggplant to a large bowl.

Pour off all but 3 tablespoons olive oil, and reserve the rest for another use. Cook onions and and celery with salt and pepper over medium-high heat until beginning to brown, about 10 minutes. Reduce heat to medium, add tomato paste and water and cook, stirring, until caramelized and almost evaporated, 2 minutes. Reduce heat to medium and add crushed tomatoes; cook for 10 minutes. Stir in olives, vinegar, raisins, capers, and sugar and cook, stirring occasionally, until thickened, about 15 minutes more. Transfer to bowl with eggplant, along with basil and pine nuts, and stir to combine. Season with salt and pepper to taste, and let cool to room temperature before serving.

Do ahead: If you have time to spare, covering your cooling bowl of caponata with plastic and letting it sit for at least 2 hours gives an even more developed flavor. It’s even better on the second day. Keep it in the fridge and bring it out an hour before you plan to eat it to take the chill off. Caponata keeps for one week in the fridge.