[Note: This got some fresh photos and a few recipe tweaks in 2019.]

You know, this really started out far more innocently than it now may seem. And yes, I know you are snickering, because how on earth can one innocently go about a process than concludes with spooning into a deep casserole dish crusted with cheese and pasta in a two to one ratio? Well, you’re me, that’s how; and you needed to use up some milk. 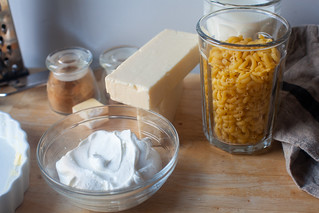 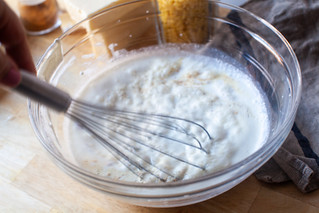 The quart of whole milk had been purchased last Saturday with the intention of using it in aforementioned spinach quiche, which, oops, didn’t require any. It’s sat unopened in the fridge since, leaving me the quandary of finding a recipe that used a large quantity of it, as my inner Yiddishe Mama would not allow me to let it go bad, and god knows I am not earnest enough to actually make my morning lattes at home. 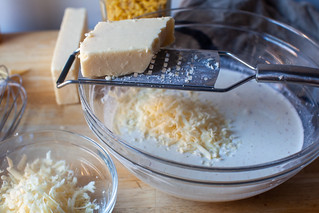 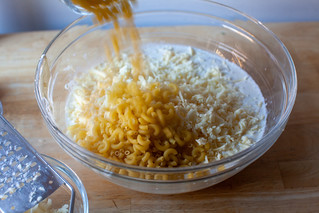 My first thought was chocolate pudding. It’s not really my favorite thing, but would that score me points with my eternal-inner-child husband or what? As I searched fruitlessly for a good basic recipe that was neither a pot de crème nor a puddle of ganache, I remembered that I also had a chunk of Cabot extra sharp cheddar to use up and now do you see how these things come to pass? Mac and cheese is one of these sinful beauts that I encourage everyone to make, at least once, from scratch. There’s no comparison, not even a nominal one, to the box mixes, and if I told that the essence of most recipes is to boil milk, stir in cheese, pour it over par-baked pasta and bake it until it’s crusted, would you then believe me? 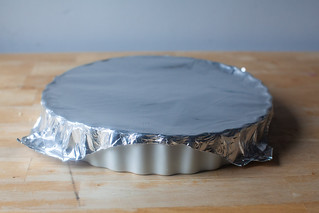 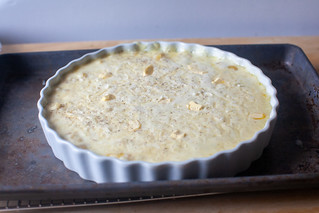 Sadly, finding a good recipe was not this simple, and seriously, when did mac-and-cheese get so gussied up? Bacon? Onions? Mushrooms? Blue cheeses? Heavy creams? Bechamel sauces with low proportions of mild cheeses? Curry? Blech! Look, there’s a place for fancy, and childhood classics aren’t it. A quick search on the New York Times website brought me to this archived article, from the NYT’s Julia Moskin. She finds herself searching, like me, for an un-fussy, classic recipe and finds even more atrocities from white sauces, Worcestershire, smoked gouda and creamed onions instead. “None of the recipes came close to my fantasy of what the dish should be: nothing more than tender elbows of pasta suspended in pure molten cheddar, with a chewy, golden-brown crust of cheese on top,” she says, to which I say amen.

She bestows on us several nuggets of gooey wisdom. One, a seemingly outrageous 2:1 ration of cheese to pasta is indeed possible, and a good thing. Two, despite suggestions of glorious, rich cheeses, she found nothing better in end results than cheddar or (!) American cheese. Three: this is no time for whole wheat pasta or artisanal orecchiette, elbow pasta works best. Finally, she suggests that you resist the temptation to form a crust with unrelated ingredients such as bread crumbs, corn flakes or tortilla chips, with enough cheese, a crisp naturally forms on top. I leave you with her parting wisdom:

“The moral of the story: When in doubt, add more cheese.” 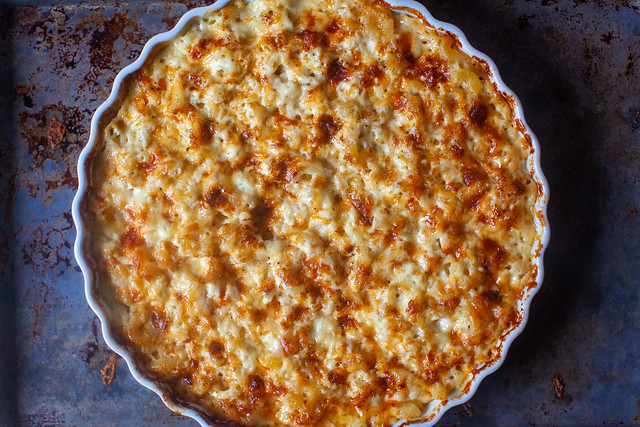 Note: There are three macaroni-and-cheese recipes on this site and this is not an accident. Each has its own purpose. The Quick, Essential Stovetop Mac-and-Cheese is exactly as it sounds, a way better than boxed weeknight savior, and it takes, at most, 3 minutes longer to make (the 3 minutes you grate the cheese.) The mic drop of the macaroni-and-cheese category, the one you make when only the very, very best will do, is Martha’s Mac-and-Cheese. It’s centerpiece material. This is the hands-off one, not as luxurious as Martha’s, not as quick as the stovetop. I use it most often as a side dish dish or as part of a spread when having people over (ribs and other summer fare, or for Thanksgiving) when there are too many other things to make to make a fussier one.

Updated in 2019: I’ve made a few changes to this recipe over the years. 1. I don’t use cottage cheese anymore (I don’t care for the slight graininess) but basically anything else — most often sour cream. You could also use ricotta (1:1) or for extra luxury creme fraiche or mascarpone — for these two, I use 1/2 cup plus an additional 1/2 cup of milk as a swap for 1 cup cottage cheese. These smoother types of dairy can be hand-stirred, no blender needed. 2. I’ve found you can get away with 3/4 of the cheese for a little less cheddar intensity, should you wish. Finally, as shown in the updated photos, I love baking this in a quiche pan of mine, but it fits best with 75% of the below recipe (i.e. 3/4 cup sour cream, 1.5 cups milk, 2/3 to 3/4 pound (see previous note) cheddar, and 6 ounces of pasta). The baking time is the same.
Heat oven to 375°F and position an oven rack in upper third of oven. Use one tablespoon butter to grease a 9-inch round or square baking pan.

If using cottage cheese, in a blender, purée cottage cheese, and add milk slowly, until smooth. Blend in mustard, cayenne, nutmeg and salt and pepper together. Pour into large bowl.

If using sour cream or another other cottage cheese swap listed above, you can simply whisk it with the milk, mustard, cayenne, nutmeg, salt, and pepper in a large bowl.

Both methods: Reserve 1/4 cup grated cheese for topping and add the rest, along with the uncooked pasta, to milk mixture, stirring to combine. Pour into prepared pan, cover tightly with foil and bake 30 minutes.