Let me state for the record that I am usually opposed to sharing non-recipes like this. Thus, whenever I’ve mentioned bacon-wrapped dates as part of a party or Friendsgiving menu and have received a surge of comments and DMs asking me for the recipe, I’ve responded, “Just Google it — recipes abound!” Or, more huffily, “That’s it. That’s the recipe.” But I’ve begun to question why I want to send your beautiful faces elsewhere, especially because when you do Google for a recipe, it’s going to lead you to what I consider inadvisable places. And now, like clockwork, here come Opinions:

Before wrapping pitted dates in bacon, I’ve, on the advice of countless glossy food magazines, stuffed almonds and/or pistachios inside the dates. I have filled them with blue cheese, goat cheese, and, truly the worst, fiddly matchsticks of aged manchego and if I could, I’d take every one of those minutes of my life back because forgive me for making us sound like a bunch of savages here, but I can barely taste them in the end, but they increase the amount of time it takes to put together what should be the simplest party trick up your sleeve threefold.

If I had this kind of time, I’d just make more. They go so fast. Most friends will tell you they had to cut themselves off at five. We estimated my daughter ate about 10 and then not one other thing. Later, I found discarded dates on various surfaces; apparently she’s only into the wrapper. You try to reason with a four year-old, I’ll be over here, cracking up. 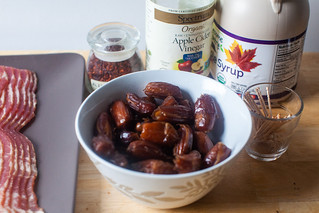 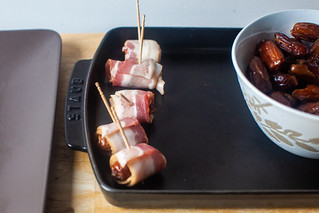 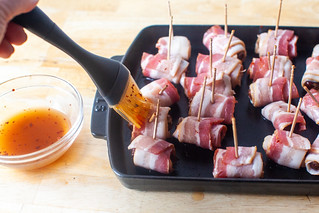 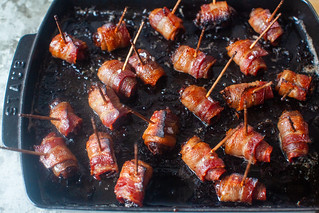 However, because it adds only about 90 seconds to the whole shebang, I do like brushing the bacon with a mixture of cider vinegar, maple syrup or honey, and some mild pepper flakes. From brand to brand, bacon can be wildly inconsistent. Some are too salty and need sweetness. Some are too sweet and need salt. But all, I find, benefit from a little blast of acidity, the sugar in the glaze increases the caramelization we are after, and the pepper makes it more dynamic.

Finally, I don’t really care what the timer says; the only thing that matters it that they’re cooked long enough that they’re nicely browned and crisp and sizzly. If not, bake them longer. Bacon should be crisp. The dates will forgive, and usually get more infused and chewy and salty. 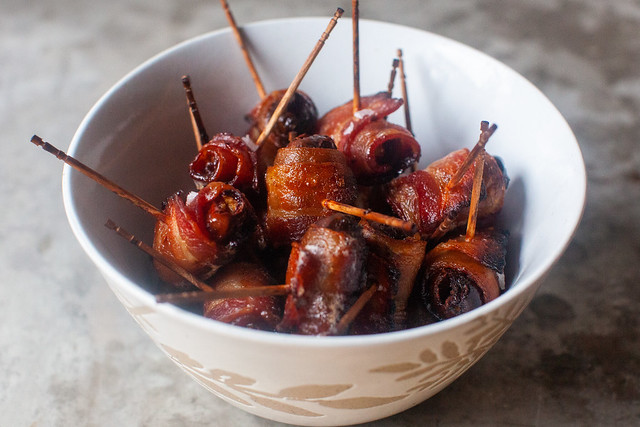 This recipe has a few variables. Most thin bacon can be split in half to easily wrap two dates. You want to make sure that your bacon will wrap around each date twice before securing it with a toothpick as it will shrink a lot in the oven. Bigger or smaller dates will change the yield, too. I’m using Trader Joe’s today, for reference; each package has 14 slices and wraps 28 dates. I find bacon easier to work with cold from the fridge. If you can track down pitted dates, this fantastically easy recipe is even more so, but should you have no choice but to pit your own, it’s not hard, just make a slit down the side of the date and you can pop the pit out. If you’d like to be fancy, this is really nice with some rosemary sprigs on the tray, roasted in the bacon drippings, cider vinegar, and salt.
Heat oven to 425 degrees F. Wind bacon around each date, securing it with a toothpick and arranging it on a rimmed, foil-lined baking sheet or roasting dish. (I didn’t line with foil and suffered the dish-washing consequences.) Combine cider vinegar, maple syrup, and pepper flakes in a small bowl. Brush or spoon over each bacon-wrapped date; you can even very briefly roll them in the mixture to coat. Sprinkle with sea salt. Roast for [updated with reduced time for first check-in, based on recent comments] as little as 15 and up to 35 minutes, until bacon is a deep, crisp, sizzling brown — this varies a lot between brands. Check in on the early end, and then every 5 minutes thereafter, to get the color and crisp just right. If you have extra vinegar mixture, you can brush it on again in the second half of the baking time. Serve warm, sprinkling with more sea salt and/or pepper flakes to taste.

Do ahead: Bringing these to a party? They rewarm well at almost any temperature. You can also bake them most of the way at home — until the bacon is cooked and mostly crisp, but not browned — and finish them up where you are, rewarming them as you do.

Leftovers: Nah, no such thing.