Among the great Ashkenazi soul food traditions — bagels, lox, chicken noodle soup, challah, brisket and its cousins, pastrami and corned beef — few are more deeply rooted in the communal psyche than kugels, or starch-based puddings that hail from southern Germany. The word kugel, meaning sphere, globe or ball, originally referred to dumplings dropped over a soup pot, the version baked casserole pans became my people’s favorite, always made in vast quantities, served on Shabbat or holidays in squares and usually shoved in the hands of unsuspecting relatives and guests in disposable foil tins on their way home. The smart ones know resistance is futile. 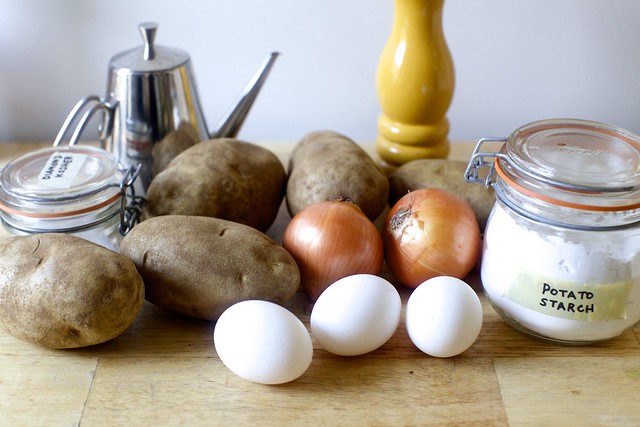 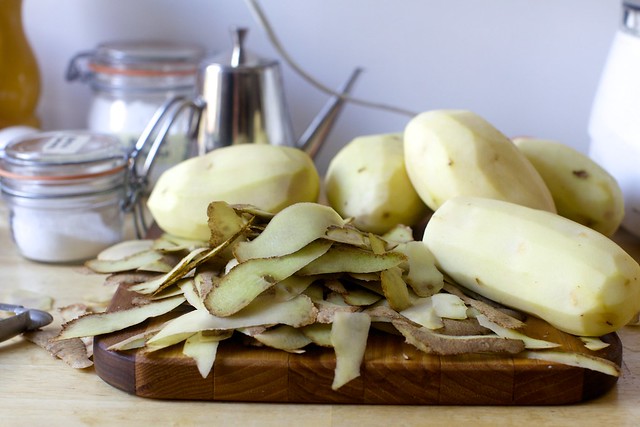 While two kinds are considered staples — noodle and potato — outside my family at least, where my mother claims to this day that she married my father mostly to get his family’s noodle kugel recipe, the potato reigns supreme, likely due to its practicality as an easily reheated side dish that complements any meal worth having. 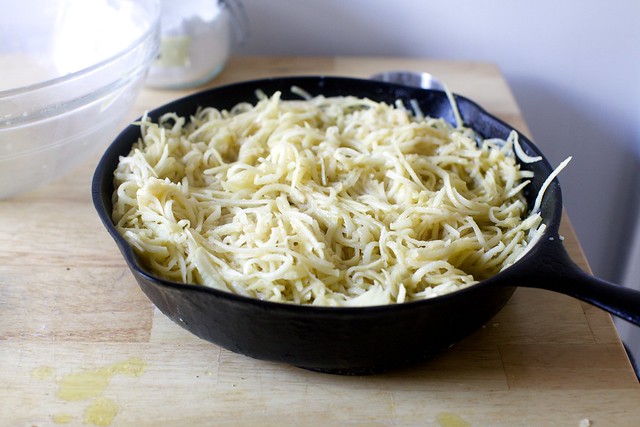 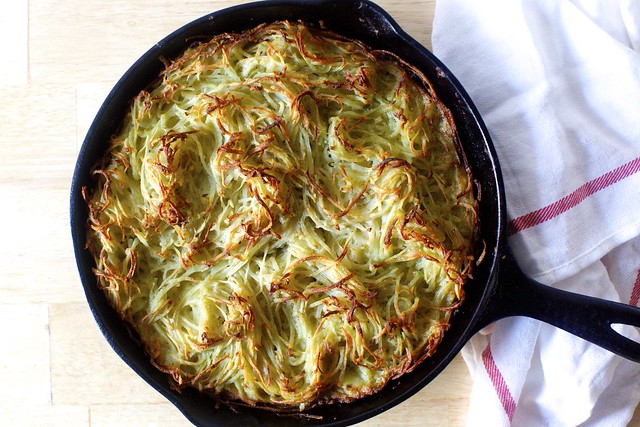 And though everyone agrees on the ingredients (potatoes, onion, eggs and fat, usually schmaltz or rendered chicken fat, of course), and that the top must be browned crisp and the inside must be tender, if you really want to get people started, ask them how to best achieve this and see if any two agree. An avalanche of eggs (says the food critic Arthur Schwartz), an unholy amount of oil (says nobody who will admit to it), shredding not grinding, grinding not shredding, shredded by hand vs. shredded by machine (usually an intergenerational dispute), wringing the extra moisture out vs. “nope, that’s wrong,” fresh from the oven vs. reheated for best flavor, with matzo meal vs. no matzo meal… are you exhausted yet? I could go on and on. 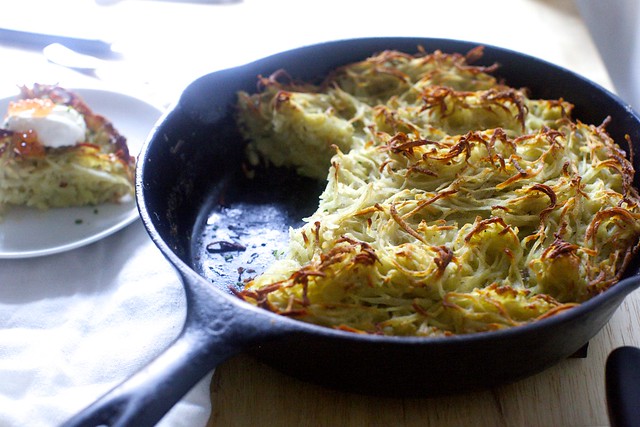 Me? I call them Lazy Latkes. As has been well-established over the last nine years on this site, I believe potato pancakes are among the earth’s perfect foods and speak of them with a fervor others reserve for bacon or pizza. Lacy mops of shredded potato and onion fried until steamy and tender inside and shatteringly crisp outside, you can have your home fries, they’re the only thing I want under my runny eggs, my son wants with applesauce and my husband wants with sour cream and caviar. And yet, they’re a bit of work, especially because I insist on wringing every droplet of moisture from the potatoes (I’m done when my arms are too tired for another squeeze) and frying them just a few at a time for best quality control. 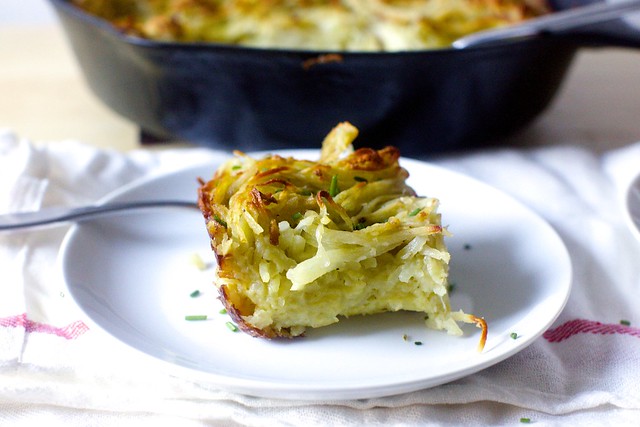 Potato kugel, the way I make it at least, is fuss-free: no wringing, all the work done in a machine and mixed in one big bowls (usually with my fingers) then piled in a sizzling hot cast-iron skillet (I mean, this is the Smitten Kitchen, after all) and baked until seriously, why aren’t you making this yet? 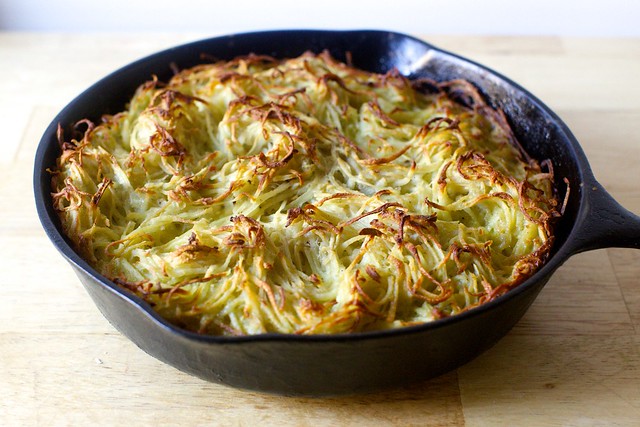 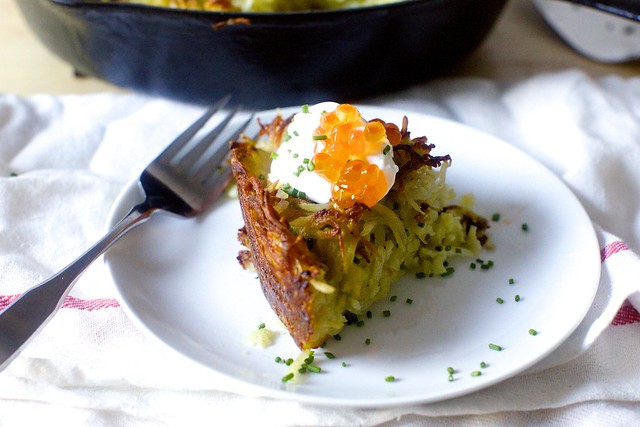 In non-Semitic terms, think of the potato kugel as a massive hash brown with profoundly crispy edges, steamy-soft insides and the showstealing complement to a dinner roast or breakfast eggs. We also like it as a party appetizer with a nice applesauce or fruit chutney or, as we roll around here, creme fraiche, caviar and chives, which is what happens when you marry a Russian. Traditional variations include carrot, zucchini, caramelized onions or garlic as well as the potatoes, but I see no reason to mess with a perfect thing.

With a food processor: Blend onions in food processor with regular blade until finely ground. Switch to grating blade and grate potatoes — I like to do this one their sides, for the longest strands.

Both methods: Place onions and potatoes in a large bowl. Sprinkle salt, pepper and starch evenly over potatoes and toss together with two forks or, as I do it, your very clean hands, evenly coating strands. Break eggs right on top and again use forks or your fingers to work them into the strands, evenly coating the mixture.

Heat a 1/4 cup oil or fat in a 10-inch cast-iron skillet** over high heat until very hot. Pour potato-egg mixture into pan carefully (it’s going to splatter) and spread evenly in pan. I like to twist and tousle the top strands a little for a pretty final texture on top. Drizzle with last tablespoon of oil. Bake in heated oven for 75 to 80 minutes, until browned on top and tender in the middle. If top browns too quickly, before center is baked, cover with foil for all but the last two minutes of baking time, though this has never been necessary in my oven.

Serve in squares, either right from the skillet or unmolded onto a platter. Kugel reheats exceptionally well in a warm oven. It keeps in the fridge for up to 4 days, and much longer (months, even) in the freezer. I like to defrost it in the fridge before rewarming it in an oven.

* Cornstarch works too. As does flour. Matzo meal is traditional. I like potato starch because it’s the least distracting and lightest. I buy mine from Bob’s Red Mill; usually in a section with other BRM products at just about any store these days (hooray).

** Without a cast-iron — Use a casserole baking dish. Just heat the oil first so it’s hot when the potato mixture lands in it. (You can do this in the oven, but it will take a good 5 minutes to get very hot. Might as well do it in 60 seconds on the stove.)