Long after our son turned one, two, and then three; a good while after my first cookbook was published, which I liked to refer to as my “second” baby, much to the disappointment of grandparents, who were hoping for the kind they could snuggle with; a sizable amount of time after we’d more or less accepted that we’d be a family of three and three only, and thus made a few decisions that might make a fourth human seem a tiny bit poorly planned […adored new apartment with no space for a fourth resident, a second cookbook and expanding midsection racing towards competing deadlines, details] and a couple months after our son started kindergarten and I was a little gloomy because I guess this meant the baby days were really behind us, the craziest thing happened. 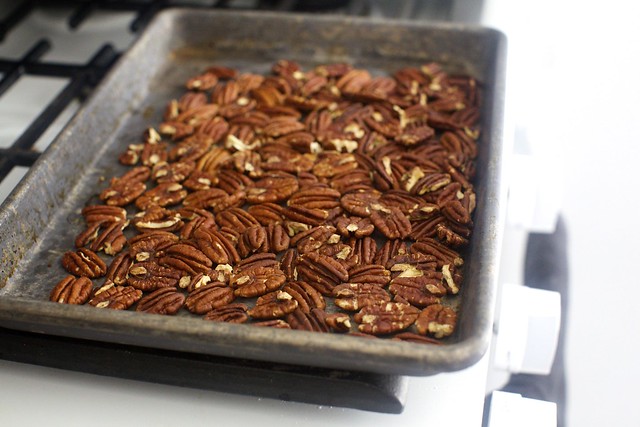 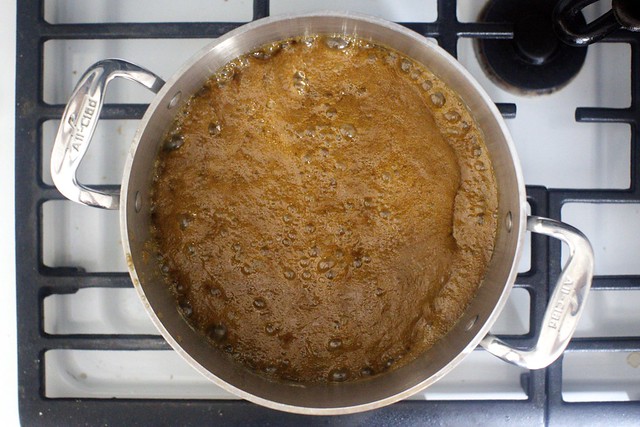 In five months, give or take, I’m going to have to give up these stretchy waistband pants and accidental afternoon naps for good, or so I hear, but not without a fight. But before then, oh boy, I think we’ve got a rather fun spring/summer ahead, and nobody, not a single human on earth is more excited than the future big brother, who has already declared his agenda of teaching the baby the ABCs, to read, to play soccer and to always let it have cookies before dinner, even if it doesn’t eat its vegetables. 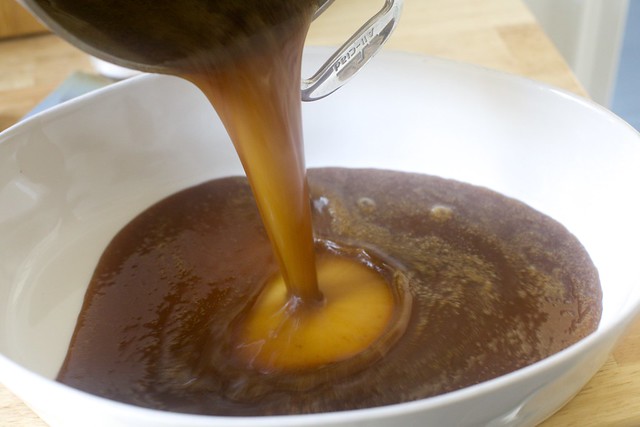 As any parent of more than one small human probably could have warned me, past experience is absolutely no predictor of future ones and, lo, this pregnancy so far has been nothing like the first. You see, the first time, I liked food the whole time. Sure, I had some weird obsessive cravings — all the grapes! all the broccoli slaw! a lot of the peanut butter! — but there wasn’t a whole lot that would cause me to pale and panic that I might not make it out of the room before something terrible happened, as I discovered would be the new normal at a birthday party I took my son to at the start of my 5th week, when steaming boxes of soft pizza arrived inside the warm, windowless room. Pizza? What kind of monster enjoys eating pizza? 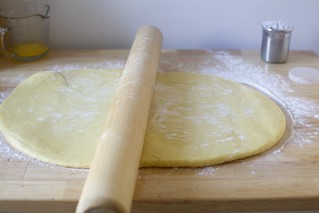 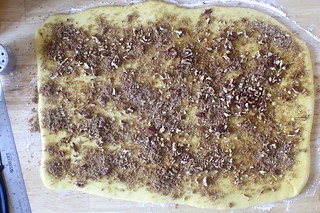 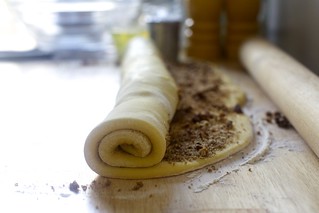 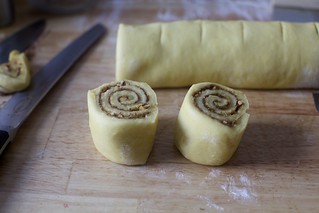 It didn’t get much better from there. Cooked vegetables? No. Things with spice? Absolutely not. Meat? Get it away from me. 95% of the things I cooked from October to January, five minutes after I cooked them? It’s better we don’t talk about it. It’s been dark times for this so-called food writer, someone who previously took for granted how easy it is to talk about food when you’re genuinely excited about it. And while I’d say that now, well into the 4th month, things are better — I ate braised beef with garlic this week, whoa — I hope you’ll forgive me if I exclusively devote this space for a while to the new acceptable categories of food: Things You Can Put Butter On, Things That Taste Like Bread, Things That Taste Like Peanut Butter and Oh My God, Is That Chocolate Cake? Give It To Me Right Now. 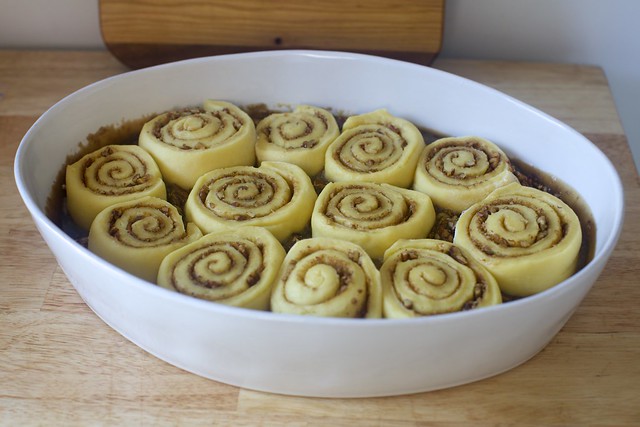 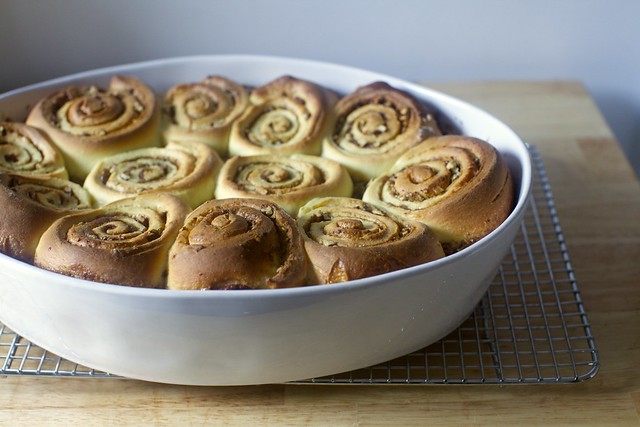 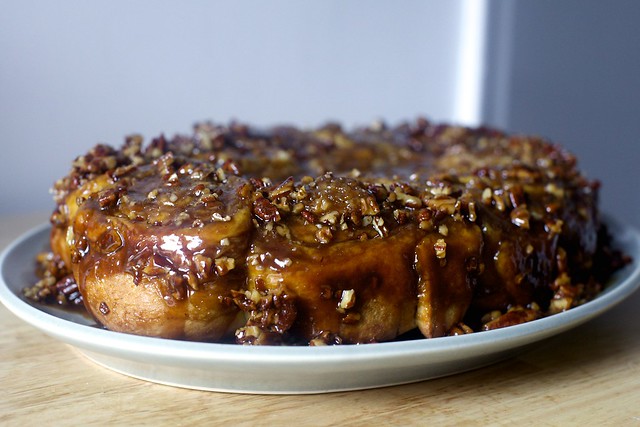 Thus today, without apology, classic sticky buns, which are as much of a play on that bun/oven bit as they are a joke on me, who frequently wails to my husband, usually after touching a grimy, gummed-up booster seat/lunchbox sleeve/iPhone recently borrowed and returned, “I hate sticky things!” To which he says “And yet you had a kid anyway.” Apparently, I have not learned my lesson. I mean, thank goodness. 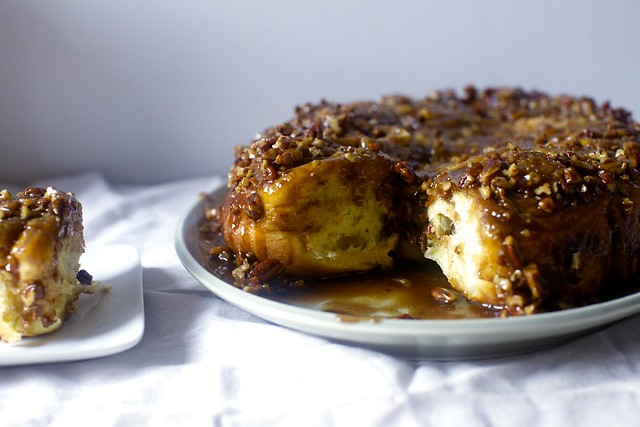 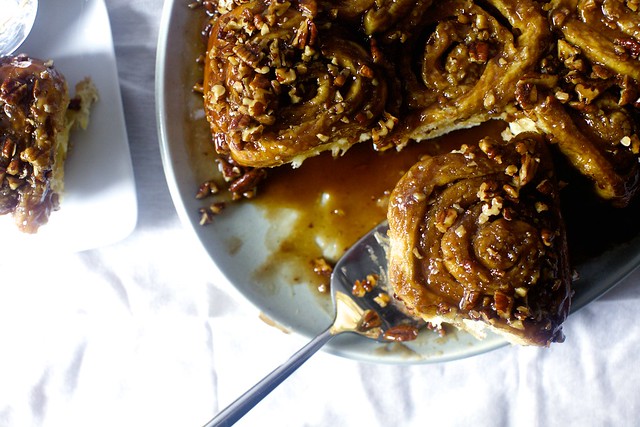 Now that we’ve gotten the news out of the way, let’s talk about why these are the best sticky buns I have ever made, eaten or dreamed about. Maybe predictably by now, most sticky buns haven’t held my interest for long because they were so assaulting in their sweetness, I feared my teeth would exit my gums in protest. What I always wanted, and what I’m striving for here, is more of a contrast. We’re going to be abstemious everywhere — holding back on the sugar in the dough itself, the cinnamon-sugar filling and pretty much everything that isn’t kale slaw the day we make these — so that we can be completely unapologetically obscenely decadent with the amount of pecan goo we drench the final buns in. This caramel is everything I am always hoping I’ll find at the end of a sticky bun: dark with brown sugar and honey, stretched and enriched with cream and butter and balanced with just enough salt and deeply toasted pecans that there will be no other recipe for me, ever. This is where the sticky bun studies stop.

Note: I used this same dough recipe in the Cranberry Orange Breakfast Buns, but here, I tested it with both kinds of readily available yeast; both work wonderfully, with a few adjustments, noted within the recipe. In short: active dry yeast needs to be proofed for 5 minutes before you begin, but it completes the first rise in half the time. These can be made in one day/afternoon or you can overnight them for the last rise.

Yield: 12 buns. This recipe could be halved and baked in a 9-inch round or 8×8-inch baking pan.

Make the dough: If using active dry yeast, it first needs to be proofed: warm milk to lukewarm, about 110 to 116 degrees F. Place in bottom of large mixing bowl or bowl of stand mixer. Stir in 1 tablespoon sugar and yeast and set aside for 5 minutes. It will look a dissolved and slightly foamy.

If using instant yeast, simply stir it into cold milk along with sugar.

Continue with either type of yeast, whisk in butter, yolks and whole egg. Add half the flour and combine with the dough hook of a stand mixer or a wooden spoon, if mixing by hand. Add salt, then second half of flour and continue to mix until a craggy dough forms. If using a stand mixer, knead for 5 to 7 minutes on low until a stretchy, elastic dough forms. If kneading by hand, do so for 5 to 10 minutes on a floured counter. Lightly oil or butter your large bowl (for the stand mixer, I scoop the dough out long enough to oil it, then use the bowl again) and let dough rise until doubled, about 1 to 1 1/2 hours for active dry yeast or 2 to 2 1/2 hours with instant yeast.

About 45 minutes before the dough has doubled, prepare your caramel base: Melt butter in a medium heavy saucepan over medium heat. Stir in brown sugar, cream, honey and salt. Bring to a boil, then reduce heat to medium-low and simmer until caramel is golden brown and glossy, about 3 to 5 minutes. Pour into a the bottom and up the sides of a deep 9×13-inch baking dish and let the dish cool down in the fridge while you assemble your rolls.

Roll out and fill buns: In a small bowl, stir sugars, cinnamon and salt together. Remove slightly cooled caramel base from fridge and sprinkle it with 1 cup pecans.

Turn the risen dough out onto a floured work surface and roll it into a rectangle that is 18 inches wide (the side nearest to you) and 12 or so inches long. (It’s okay if it goes longer/thinner, but try to keep the width at 18″.) Brush the dough with the melted butter. Sprinkle it with the filling and then 1/2 cup pecans. Roll the dough into a tight 18-inch long spiral. Using a sharp serrated knife, very, very gently saw the log into 1 1/2-inch sections; you should get 12. Arrange the buns evenly spread out over pecan-caramel base.

Proof buns: Cover with plastic wrap and proof at room temperature for another 1 to 2 hours, until they press tightly together in the pan and look puffed again. Or, you can refrigerate the buns overnight, and up to 16 hours. If chilling overnight, remove from fridge 1 hour before you’d like them to bake. Heat oven to 350°F (175°C).

Bake buns: Bake your buns until they’re puffed and golden (the internal temperature should read 185 degrees F), approximately 30 to 40 minutes. If they brown too quickly on top before the centers are baked, cover dish with foil for remaining baking time.

Let rest in pan on cooling rack for 2 to 3 minutes, then carefully and quickly invert onto a large serving tray, nudging any caramel left behind in the pan or puddled in the center of the buns back evenly over the tops and sides. Eat warm. Store any leftovers in the fridge, rewarming slightly.