I first discovered the peculiar subcategory of chopped raw vegetables called “health salads” some 14 years ago when a friend introduced me to the many wonders of the prepared foods aisle at Zabar’s. Even then, I found the idea of one type of salad being labeled “healthy” while my other favorite in the same refrigerator case, the Mediterranean Pepper Salad with Feta and Olives was, I don’t know, something akin to a heart attack on a cracker, somewhat eye-rolling but I now realize that it was the coleslaw-like salad’s mayo-free dressing that designated it such a lofty nutritional status. 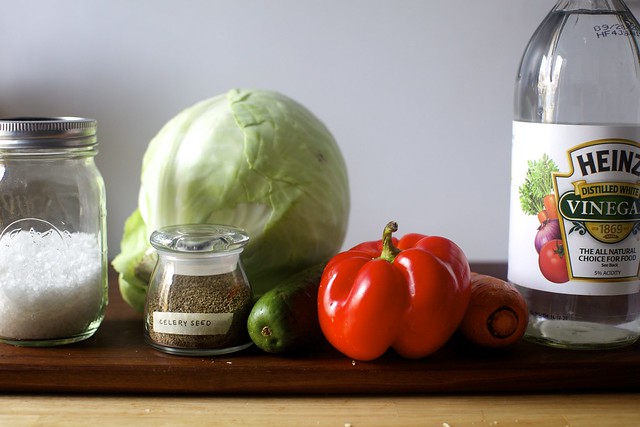 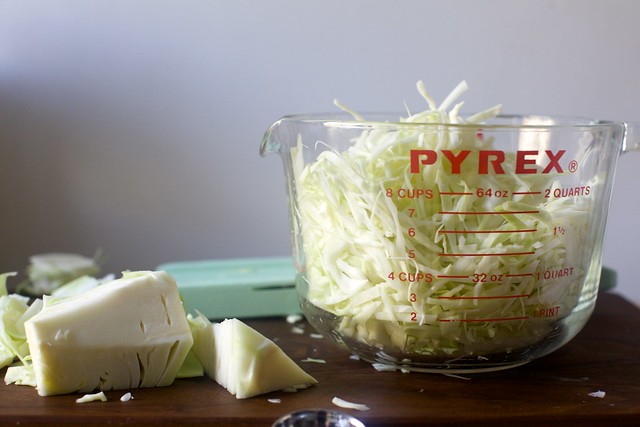 Regardless, ever stubborn, I did not eat it because it lacked much-maligned mayo, because it was chock full of folate-rich cabbage or because it was branded wholesome, but because I liked it. Crunchy, bright, as good on day 2 as it is on day 7, it was the perfect light meal or side to a sandwich and even though I lived nowhere near the store and found shopping at Zabar’s, even on the slowest day, to be a shopping-cart-rammed-into-the-back-of-my-heels level of annoying (though, really, I should know better than to pause between locals and their smoked fish counter), I was a loyal customer for life so long as they could keep providing me my lightly pickled cabbage fix. 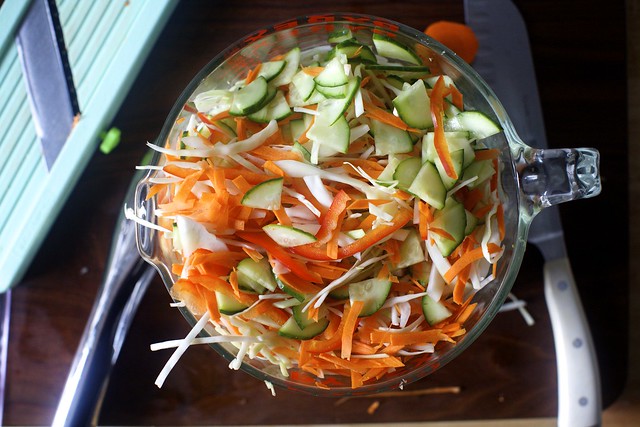 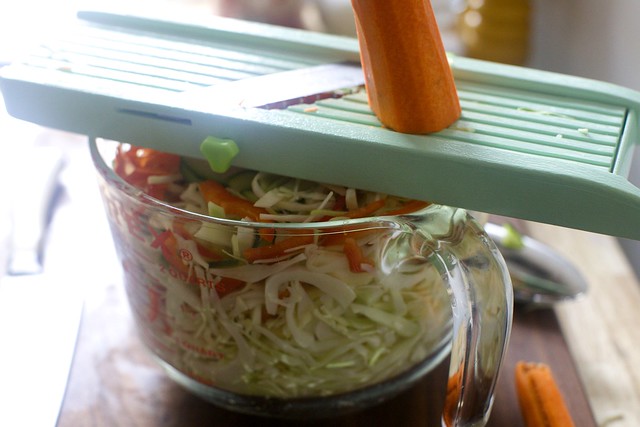 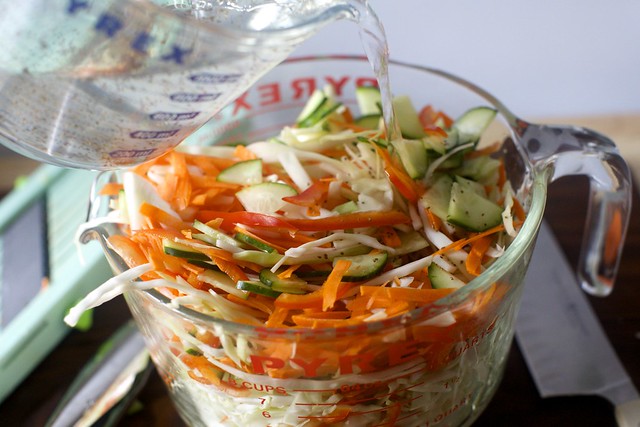 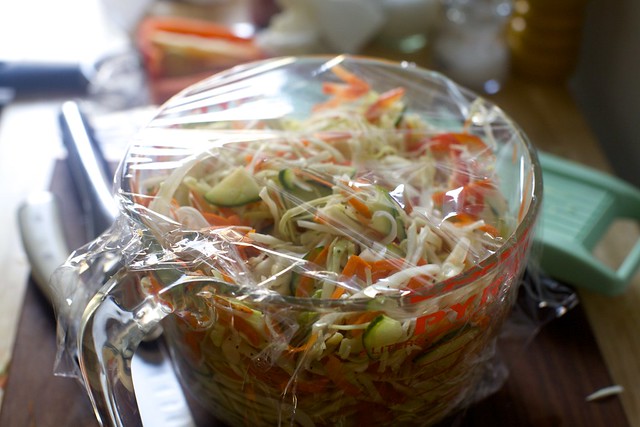 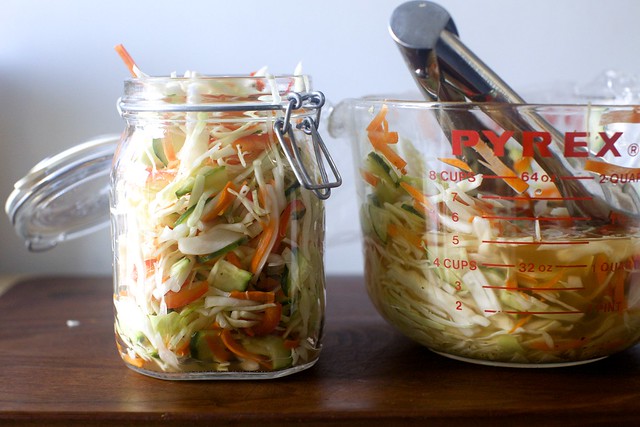 Plus, this was in my ovens-are-for-sweater-storage phase of my New York life. Why would I try to make it for myself when someone else was perfectly willing to do it for me?

Flash forward seven years and a couple careers, I wrote an article for NPR in 2007 about coleslaw in which I reversed engineered my Zabar’s favorite. In the seven years since, I all but forgot about it until a cabbage salad from Russ & Daughter’s two weeks ago brought it all back. Because I’m obsessed with timing, part of me thinks this would be a better fit for January, when fat-free, vegetable-rich austerity measures are the order of the month. But the thing is, what with all of these vegetables still going strong at local Greenmarkets, it’s seasonal right now. Plus, do you know what’s coming in the next few weeks? Butter and cream-drenched vegetables. Stuffing. Gravy. Biscuits. Every pie, ever and if you’re lucky, a pumpkin cheesecake too. You’re going to need a lifeboat, something you can have on hand in your fridge to break up the calorie stampede. I vote for this. 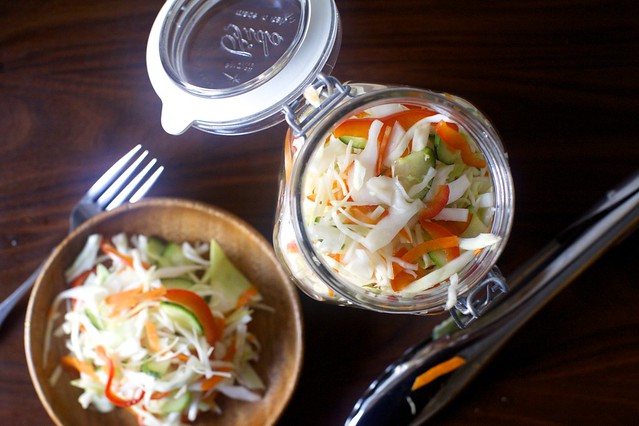 Thanksgiving and beyond on Pinterest! Did you know that you can follow the Smitten Kitchen on Pinterest, and that I’ve been getting the page ready for holiday cooking with new boards with Everything Pumpkin (it’s the most wonderful tiiiiime of the year!), Thanksgiving: Savory (gobble, gobble), Thanksgiving: Sweet (mm, pie), Homemade Food Gifts, plus All The Cookies in the archives, because I promise, there’s nothing wrong with you that two cookies can’t fix. Hope that helps get your November kitchen engines going.

One year ago: Cranberry-Orange Breakfast Buns (please tell me you’ve made these, and if you haven’t, you’ll try soon? you will not regret it.)
Two years ago: Granola-Crusted Nuts
Three years ago: Baked Pumpkin and Sour Cream Puddings
Four years ago: Upside-Down Cranberry Cake
Five years ago: Raisin-Studded Apple Bread Pudding
Six years ago: Cottage Cheese Pancakes, How to Max Out Your Tiny Kitchen and Leite’s Consummate Chocolate Chip Cookies
Seven years ago: Roasted Stuffed Onions
Eight years ago: Not Your Mama’s Coleslaw, Indian-Spiced Vegetable Fritters, Dreamy Cream Scones, Shrimp Cocktail and an Artichoke-Potato Gratin

And for the other side of the world:
Six Months Ago: Five Egg Sandwiches
1.5 Years Ago: Japanese Vegetable Pancakes
2.5 Years Ago: Warm, Crisp and a Little Melty Salad Croutons
3.5 Years Ago: Leek Toasts with Blue Cheese

Pickled Cabbage Salad
Inspired by the health salad at Zabar’s

My primary change to this from my last version, and from the versions I’ve had from delis, was the addition of celery seed. I added it on a whim, and we cannot get enough of the flavor. Just a little permeates the pickle mixture with a hint of celery, without actually using celery, which can get a little beige after pickling. This is a flexible recipe, however. You could add actual celery slices if you wish, red onion or a little red cabbage to create the ink pinky tangled look of the Russ and Daughter’s version (which has only a pinch of carrot and pepper strips in it, and no cucumber). The carrots, cucumbers and peppers I use here are modeled after the Zabar’s version.

Mix brine ingredients in the bottom of a medium bowl and set aside.

By the time you’re done preparing your vegetables, the sugar and salt should in the pickling mixture should have dissolved. If not, whisk a few times until they do. Taste and adjust if you’d like it a little saltier — I added 1 more teaspoon of kosher salt in the end.

Pour pickling brine over vegetables and cover bowl with a lid or plastic wrap. Refrigerate for 1 hour or up to 1 week. Salad becomes more pickled as it rests. Eat with everything.

* Not all salts are weighted equally: Read more here. I used Morton brand, which for 1 tablespoon plus 2 teaspoons clocks in at 24 grams. If using table or fine sea salt, use only 4 teaspoons.