The problem, if there could be one, is that if a 30-something with a kid out of diapers ever says to a group of people, “I have news!” certain presumptions are made. So, to quell any wild ideas before they take off, no, this is not that kind of news. I’m sorry; we’re bummed too. 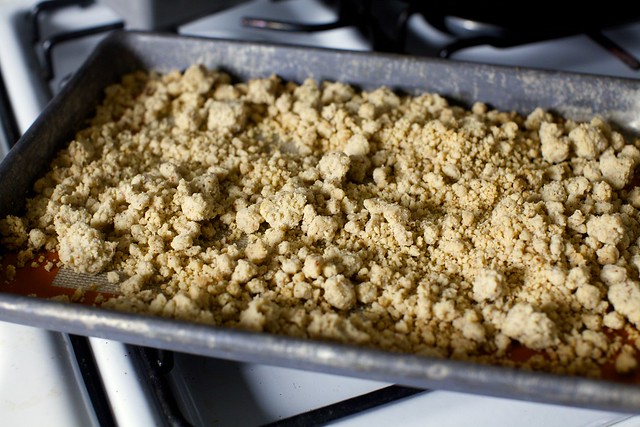 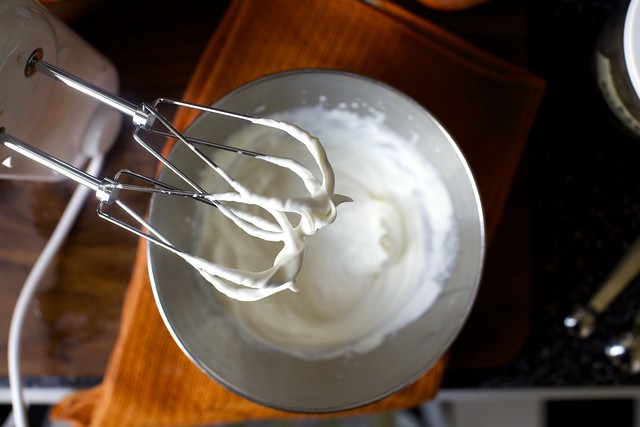 But I have other news, which means we are so overdue for a catch-up/tell-all/gossip session, so pull up a chair. I’ll go first: 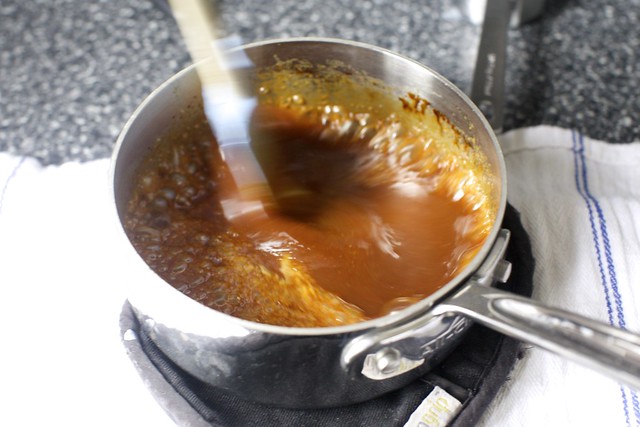 Another Smitten Kitchen cookbook is in the works. It’s official: I did not learn my lesson the first time. As the second Smitten Kitchen Cookbook is untitled, unthemed and won’t be out for over two years, I keep imagining each of you rolling your eyes right now because there’s nothing to talk about yet, sheesh, Deb. But I don’t like there to be any secrets between us, so here’s what I do know about the book: like the first book, it will include a bit of everything that I love to cook — breakfast, salads, vegetarian main dishes, a few meat dishes, cakes, cookies and pies, and delicious party foods and snacks — plus some new stuff, like soups, which I’ve finally embraced. (Hooray!) Like the first book, only a small portion of the recipes (say, 10 percent) will be familiar to you and others who read this site; I’d never make you wait for stuff you’re already getting for free. I’ll be taking all of the photos again (see above: not learning lessons) and the book is slated to come to you in October 2016, which is four years after the first book, or three years too soon or too late, depending on your perspective. 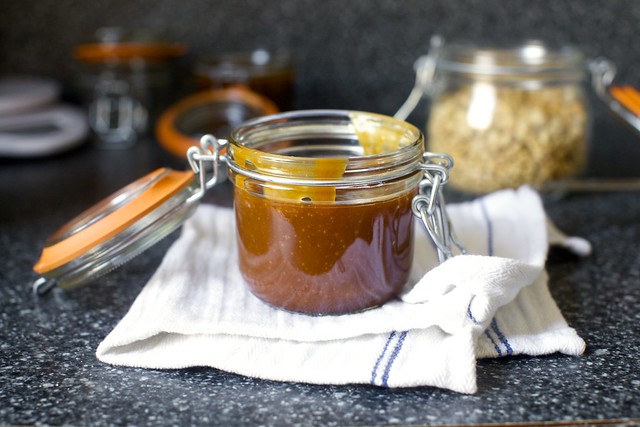 Here’s what else I can tell you: I am ridiculously excited to share it with you. I will admit that I resisted writing another book for a while because I was (the best reason to be) exhausted after the three book tours and I missed being able to focus solely on this space. But I was also completely terrified of what expectations might be for the second book; the thought of it made me want to go into hiding. I kind of did go into hiding. But even as I denied any interest in writing another book, I kept this list of things that might be good for some future book one day. And earlier this year, I realized that list had topped 100 recipes and, rather than an assorted list, it was looking very much like a book, a book I wanted to start working on immediately. I can’t wait to share this new batch of dishes with you. I realize 2016 may seem an eternity from now, but I’m intent upon making it worth the wait. 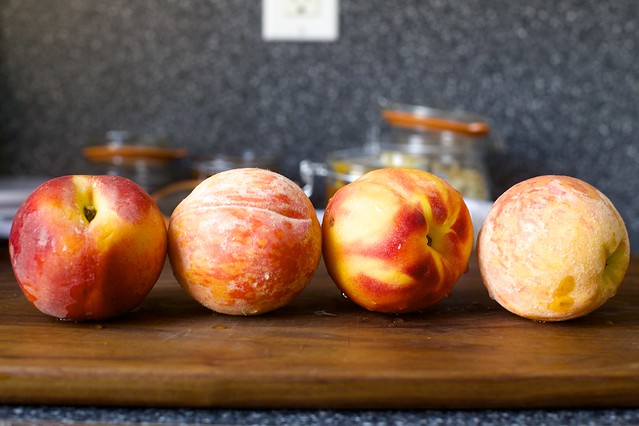 We are moving. But not far. In 2009, when we learned I was pregnant, we were living in a 1 bedroom fourth-floor walk-up that was definitely not going to cut it for a family of three. We set out to find a 2-bedroom, but moved here instead, which is more like a 1.5 and that half bedroom isn’t really a bedroom (a “Junior 4,” in real estate parlance). We thought we’d stay for a couple years, and then buy something proper. [Those last three words are hilarious if you don’t happen to be a millionaire with mostly cash holdings.] A “couple years” turned into “over five years” and, every year, we’d renew our lease while swearing it would be the last time. And every year, we’d do it again because the rent was reasonable (mostly because the real estate market has blown up since we moved here) and we didn’t know where we wanted to go next, anyway. But it was also stressing us out that our almost-five year-old was in a toddler bed and then, a few weeks ago, an apartment became available in our building that we’d always quietly coveted as it both fit the bill with a proper, albeit teeny second bedroom and also this pie-in-the-sky thing I had zero expectations of ever finding in a home on this island: a deck. Where I will plant things. And drink an Aperol spritz outside. Oh, you thought I was going to say that the kitchen was the dream come true? Ha. Well, it’s still tiny but it’s a little bigger. It’s also fantastically uglier (if possible) but … we’re working on that. Haggling, if you will. Have you ever tried to talk a landlord into putting a door where a door is not? Did I tell you about the fake columns a previous tenant planted all over the apartment? Maybe you’d like to see the plastic chandelier in the master bedroom that looks like it has Mardi Gras beads strung through it, care of the previous college boy renters? Oh, it’s been a very entertaining month. Regardless, we move in 2.5 weeks and, as you’d expect, we haven’t packed a thing, but I already impulsively bought an herb garden over the weekend. No way this could end badly! 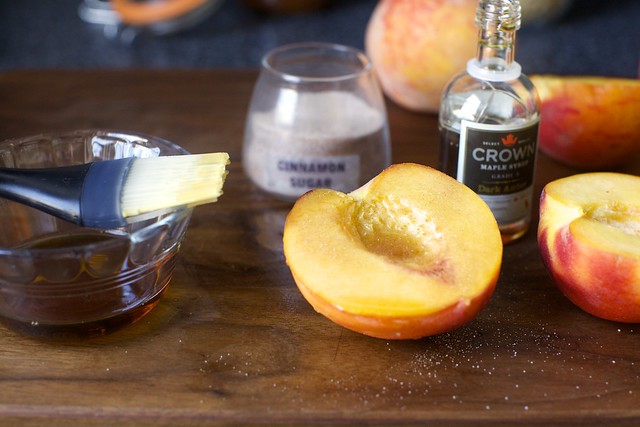 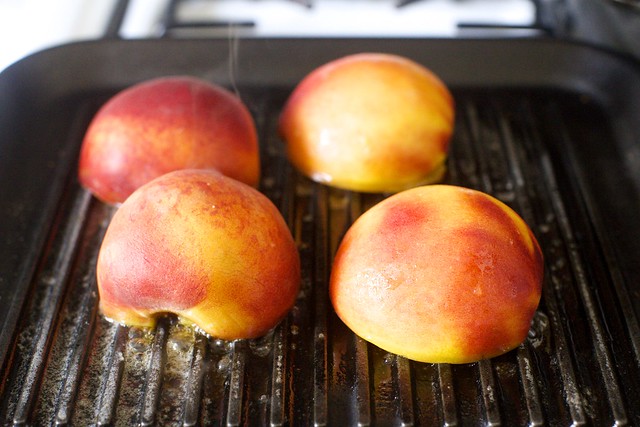 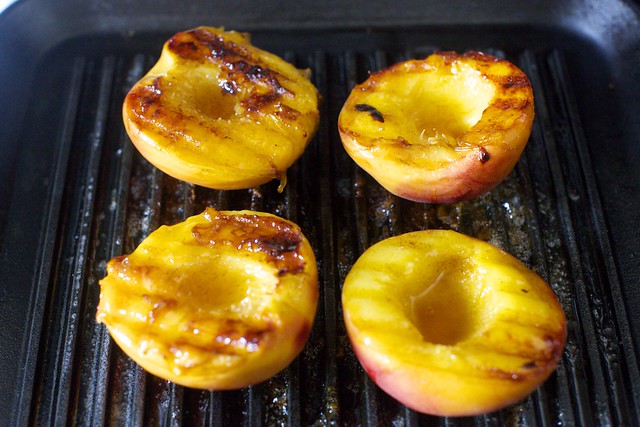 You sound like you could use a sundae. Have you ever wondered why bananas get all the ice cream sundae love? I mean, what kind of sick person would choose a split banana over a maple syrup-brushed and cinnamon sugar-sprinkled grilled peach? Certainly not me. So I made us celebratory summer splits instead, comprised of everything wonderful I could think of: halved peaches that are brushed with maple syrup, sprinkled with cinnamon-sugar and grilled until tender, then topped with vanilla bean ice cream, salted bourbon caramel sauce, a tangy whipped cream and cookie crumbles that taste like pecan sandies. Everything can be made in advance (and they can be rewarmed if needed) so if you’re the kind of person that begins counting down to the weekend on Thursday morning, well, you know exactly what to do now. 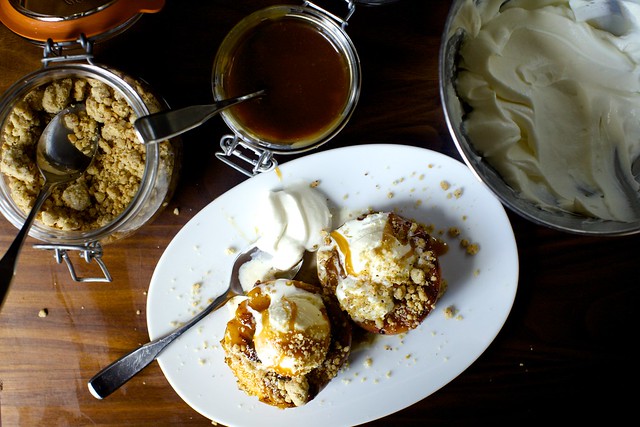 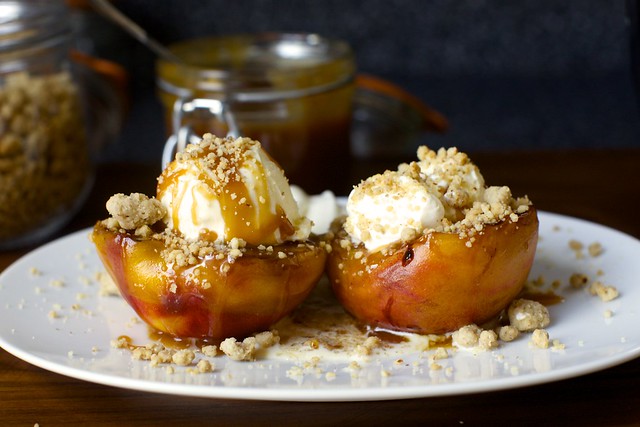 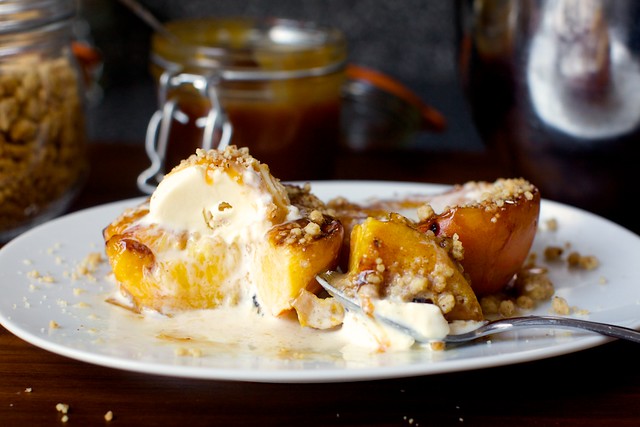 Come at me: Now it’s your turn to tell all! Or, uh, feel free to ask me any anything.

Each of these elements can be made in advance, if you wish to plan ahead for a weekend of peach sundaes. Even the whipped cream, which is thanks to the genius of Nancy Silverton (read more at the links as to how it stays stable). You can skip the sugar in the whipped cream if you’d like more of a tangy grown-up contrast between that and the ice cream and peaches. You could probably skip the whipped cream altogether, but where is the fun in that? Even the peaches, once grilled, can be rewarmed in an oven. If you don’t have a grill, you can roast the peaches at 375°F for 30 to 35 minutes, face-down in a well-buttered dish, or less, if you’d like them semi-firm. We used store-bought ice cream, but this homemade vanilla, buttermilk or even fennel ice cream would be wonderful here.

This serves 8 if each person gets a single peach half, 1/4 cup scoop of ice cream, a drizzle of caramel sauce, a handful of cookie crumbs and a dollop of whipped cream. You could also give each person two peach halves, as a nod to the massive nature of most banana splits. I doubt anyone would mind.

Peaches
Butter, for grill
4 large firm-ripe peaches (free stone, if you can find them, not that I ever do), halved and pitted
2 to 3 tablespoons (30 to 45 ml) maple syrup
1 teaspoon cinnamon sugar, or just cinnamon to sprinkle

Make crumbs: Heat oven to 350 degrees F. Line a baking sheet with parchment paper or a nonstick baking mat. Spread the nuts out in one layer and bake them, stirring occasionally, until they are well browned, 10 to 13 minutes, tossing them around once or twice to ensure they toast evenly. Cool the nuts; you can hasten this along by putting them in a bowl in your freezer for a few minutes. Leave oven on and tray lined with parchment.

Place cooled pecans, flour, sugars, salt and baking powder in a food processor and blend until the nuts are as powdery as possible without turning to paste. Add melted butter and vanilla and pulse machine until large and small crumbs form. Spread them out on prepared baking sheet. Bake for 8 minutes, then move the crumbs around for even browning, and bake them for another 4 to 5 minutes, until they are golden brown. Let cool completely on rack, then transfer to a jar. They can be stored at room temperature in an airtight container for a week.

Make caramel: Place sugar in the bottom of a medium-sized heavy saucepan. Set over medium heat. In a few minutes, the sugar will begin to melt. Use a spoon or spatula to stir it as it melts, to ensure it does so evenly, breaking up any chunks as needed. Continue to stir continuously until the melted sugar takes on an amber color, which usually happens at about the same time the last sugar chunk melts. Remove from heat and carefully stir in cream, just a little drizzle at first (it will hiss and splatter) and then the rest. If your sugar re-solidifies, return the saucepan to the stove over medium-low and stir it until the sugar melts again. Let caramel sauce cool slightly before adding bourbon or vanilla and salt. Store caramel sauce in a glass container for up to 1 week in the fridge. Rewarm to loosen the caramel into a sauce consistency, as needed. If using it within a couple hours, you can leave it out.

Make whipped cream: Using a clean bowl and whisk (electric or a regular large one), whip cream and sugar, if using, until it holds soft peaks. Whisk in crème fraîche or sour cream, and vanilla. Keep chilled until needed. On day two, mine is still perfectly whipped. Theoretically, amazingly, it should stay whipped for a few days, using this recipe.

Grill peaches: Heat your grill to medium/medium-low and butter it generously. Brush peach halves with maple syrup and sprinkle with cinnamon sugar or just cinnamon. Place cut side down on grill and grill them gently and slowly, between 10 and 20 minutes, until they take on nice grill marks and are mostly tender to the touch. Brush a little extra maple syrup on top when you’re done, if desired. If you’d like to grill these in advance, they can be warmed before serving in a lowish oven.

Assemble splits: Place a peach half, face up, in a shallow bowl. Top with ice cream, caramel, whipped cream and a handful of cookie crumbs. Don’t forget to share.