I think this should be your new favorite way to show off. If your dinner parties are anything like mine, dessert arrives with more of a whimper than a bang. Oh yes, that trifle looks lovely, that cheesecake is most certainly the bomb, most people are probably thinking, but I just crawled out of a vat of deeply braised short ribs and I’m gasping for air. Doctor, gimme an apple, stat! I forgot what fresh food looks like.

Except, what was that you said about butter and sugar? Oohkay, sure, I’ll have a little bite. I mean, what’s a meal that doesn’t end with a sweet note? None that I want to be part of, to be honest. But when you want to unlock sweetness’s hold on richness, oh friends, please do this.

I spied this not even recipe, but dare I say, approach to pears last month in The Atlantic and I have eagerly awaited the magic moment of overlap between the Greenmarket’s pear loot, Jacob’s nap and the kind of overcast, stay-inside kind of day that makes you wish for a snowy backdrop. Six weeks later, I had one. Although I call this a dinner party dessert — it looks and tastes showy but is simple enough that it’s no extra drama for you to assemble last-minute — it will also make Monday afternoon lunch feel like you did something fancy. And I don’t know about you, but it may have just been the best part of my day. 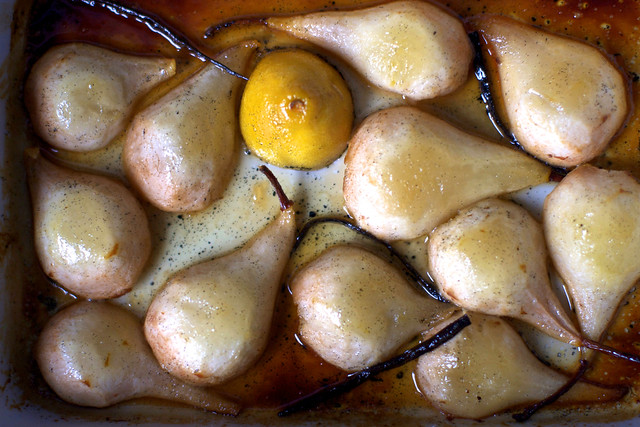 Vanilla Roasted Pears
Adapted from Sally Schneider at The Atlantic

And how it tastes? Do I even need to tell you what happens when pear juices bubble with lemon, butter and vanilla bean-flecked sugar for an hour? Pear caramel is what happens. And how it smells? Good enough that the UPS guy stays too long.

Now, I consider this perfect right from the pan but the Schneider notes that it can be many, many things, from a sorbet to an accompaniment to a cheese plate to confit to serve with pork or ham. She’s probably right, but my batch will never last long enough to undergo a transformation.

Preheat oven to 375°F. Place the sugar in a small bowl. With a thin, sharp knife, split the vanilla bean lengthwise in half and scrape out the seeds. Stir the seeds into the sugar.

Arrange the pears in a large baking dish, cut-side up. Drizzle the lemon juice evenly over the fruit, then sprinkle with the sugar. Nestle the vanilla pod among the fruit (I first slit my halves lengthwise into quarters). Pour the water into the dish. Dot each pear with some butter.

Roast the pears 30 minutes brushing them occasionally with the pan juices. Turn the pears over and continue roasting, basting once or twice, until tender and caramelized, 25 to 30 minutes longer (if the pears are small, test for doneness after 35 or 40 minutes of cooking; a paring knife poked into the thickest part of one should meet with no resistance).

Serve warm, spooned with the caramelized pear drippings from the pan over ice cream, dolloped with crème fraîche, on your morning oatmeal, over slices of gingerbread or so so much more.