My mother makes the best apple cake, and has for as long as I can remember. Big cinnamon-y chunks of apple nestle into a coffee cake I would call “unbelievably” moist, but really, should not be hard to believe considering that my mother is also the one who brought us another of the best cake recipes on this site, The Chocolate Chip Sour Cream Cake. The cake gets better the second day, when the apples juices seep further into the cake and I have seen the conviction of many a chocolate-obsessed/fruit dessert non-believers crumble upon trying a single slice of it. The apple cake, it’s some good stuff. 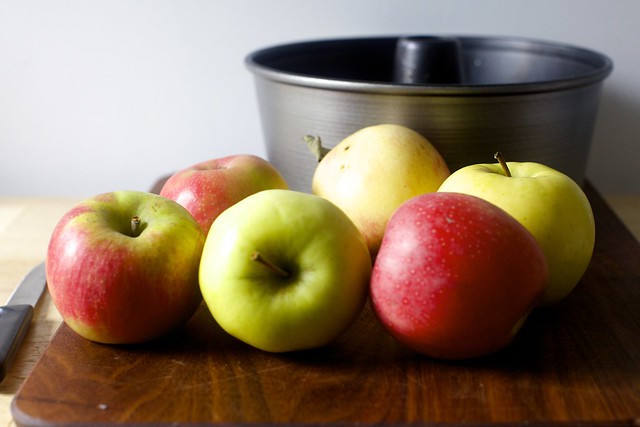 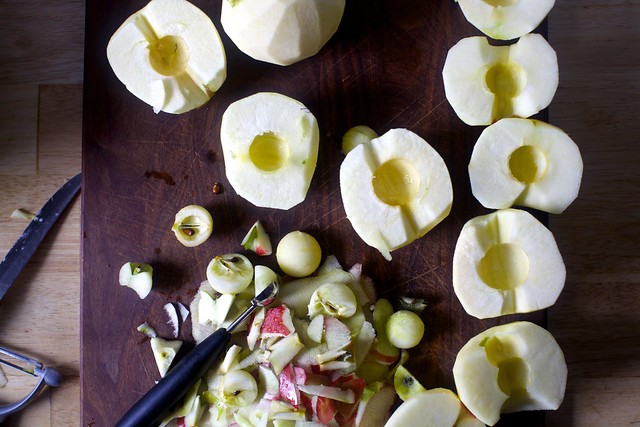 Not above pilfering content for my website from my nearest and dearest, I talked my mom into coming over (and heaving up all 51 stairs–she likes to count them) on Sunday to bake the cake with me for the New Years dinner at my in-laws today. I wanted to get the recipe down, but also to get the back story on the cake recipe. In bits and pieces, I remember it being called at different times a “German Apple Cake” and a “Jewish Apple Cake”, though what made it either was unclear. I suspected that if was indeed German, it came over with her parents as they escaped the Holocaust. I imagined that my grandmother and her mother before her must have made this cake often, as it uses such simple ingredients but the final product is so much better than the sum of its parts. 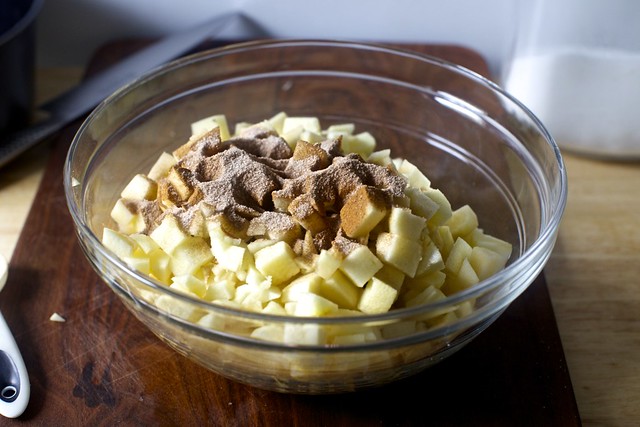 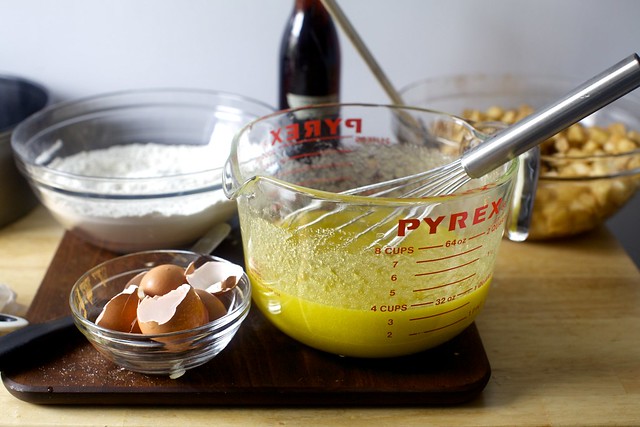 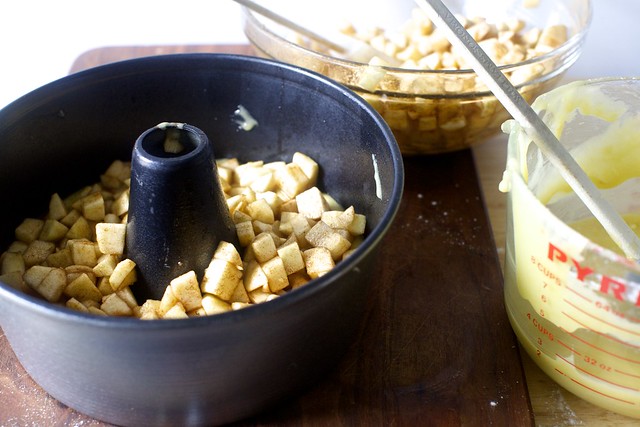 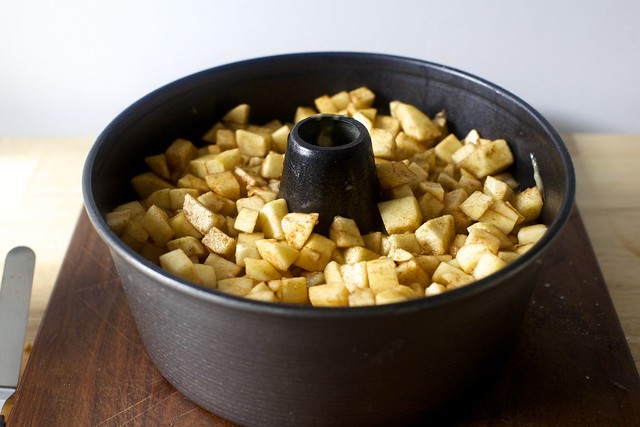 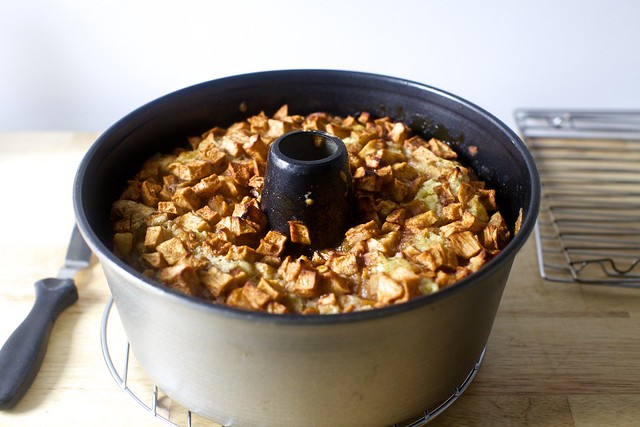 As it turns out, the actual story is, uh, a little less romanticized. My mother has been making this cake not for 60-something years, but since I was a kid. And the recipe, it didn’t come from her mother or her mother’s mother (“My mother? Bake a cake? Ha!” my mother said.) but a clipping that a neighbor gave her from some now-defunct magazine. Entirely crushed that the recipe involves no escapes from terror, no bits of the old country, no tales of war rations or ingredients that don’t translate well into English, I briefly considered where my more interesting history of the cake should be the only story I tell, but alas, I am a terrible liar and find the vast expanse between my version and the actual truth to be as funny of a story as any.

My grandchildren, however, will be able to talk all about how this recipe was passed down their crazy Grandma Deb (with the awesome hair, I hope they’ll add), because we’re not getting rid of it any time soon. 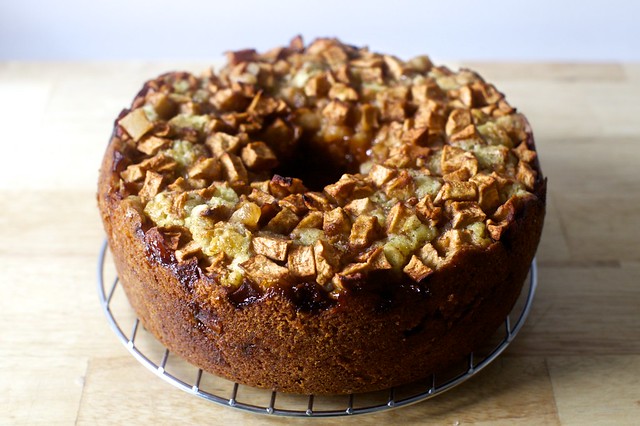 One year ago: Bronx-Worthy Bagels
Two years ago: Flower Cupcakes

For the apples
6 apples, Mom uses McIntosh apples, I use a mix of whatever looks good
1 tablespoon ground cinnamon
5 tablespoons (65 grams) granulated sugar

Heat oven to 350°F (175°C). Grease a tube pan. (I use this one or an equivalent one-piece tube.) Peel, core and chop apples into 1-inch chunks.Toss with cinnamon and 5 tablespoons sugar and set aside.

Stir together flour, baking powder and salt in a large mixing bowl. In a separate bowl, whisk together oil, orange juice, sugar, vanilla and eggs. Mix wet ingredients into dry ones; scrape down the bowl to ensure all ingredients are incorporated.

Pour half of batter into prepared pan. Spread half of apples (and their juices) over it. Pour the remaining batter over the apples and arrange the remaining apples on top. Bake for about 1 1/2 hours, or until a tester comes out clean.*

Cool completely before running knife between cake and pan, and unmolding onto a platter.

Do ahead: This cake is awesome on the first day but absolutely glorious and pudding-like on the days that follow, so feel free to get an early start on it. I keep it at room temperature covered with foil.

* Tip: The apples love to hide uncooked pockets of batter, especially near the top. Make sure your testing skewer or toothpick goes not just all the way down to the bottom, but does a shallow dip below the top layer of apples to make sure it comes out batter-free. Should your cake be browning too fast, before the center is baked through, cover it with foil for all but the last few minutes in the oven.