My husband will tell you that his favorite dessert my chocolate caramel cheesecake, the orange-chocolate bundt cake, Mom’s chocolate chip sour cream coffee cake or the bourbon-pumpkin cheesecake but don’t believe him — he lies. Alex’s favorite cake looks comes from either Billy’s or Magnolia bakery, looks to him like “opened Oreos” and is called an icebox cake.

It is also, I am so sorry to say, a bit of a sham. Like the 1-2-3-4 cake recipe (1 cup butter, 2 cups sugar, 3 cups flour and 4 eggs) as well as the back-of-the-box shortcut buttercream frosting that they bakeries combined to form a “cupcake trend,” they have neither invented the icebox cake nor made it any better than the American home cooks that first concocted these simple desserts — they’ve just got better marketing.

The National Biscuit Company — later shortened to Nabisco and whose original factory now houses Chelsea Market, OXO products and the Food Network — introduced their Famous Chocolate Wafers in 1924, along with a ginger and a sugar variety. The chocolate ones, lighter, thinner and more crisp than an unfilled Oreo but with a noticeably similar taste, and would have likely faded into obscurity when the non-chocolate varieties did had some ingenious 1930s housewives not figured out that if you stack them, separated with a layer of sweetened whipped cream, they soften overnight and become a glorious chocolate cake, with layers as thin and wisp-like as ribbons. One thing I will hand to the bakeries that have trendified this dessert — and sell it for $3.50 per slice — is that two years ago, I’d have been hard-pressed to find these cookies in any store (seriously, I still can’t even find the product on Nabisco’s website) and now, not only do they hold some shelf-space at my local Gristedes, I can order them from Amazon. 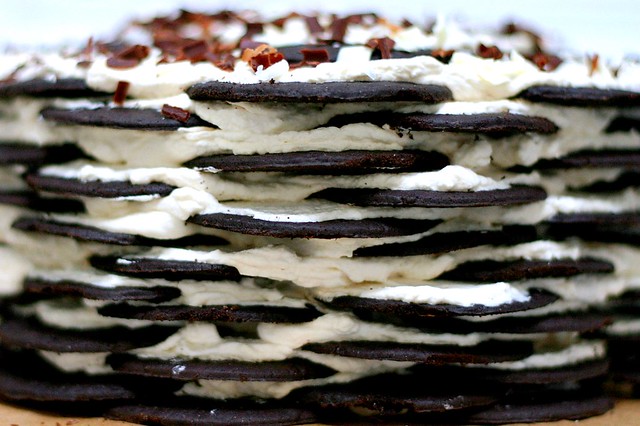 Of course, none of this holds any interest to my husband, who in suffering the ultimate act of cruelty on Thursday night, had to witness me throw together the cake (in about 30 minutes, to boot), pack it away and then serve it to other people. I wanted to make something for my chocoholic coworker’s last day of work, but not actually have to burn the midnight oil or worse, skip the gym, to do so. Though Luisa and I (whose significant other is also a Billly’s icebox cake fanatic) had schemed a few weeks ago to make one completely from scratch in the near future, icebox cake’s temptation wore me down sooner. You simply cannot lose when you make this cake.

If you can get past this one thing: THREE CUPS of heavy cream! Mon dieu! This, plus two packages of cookies, a few tablespoons of sugar and possibly, a heart doctor, is all you will need (though I suggest buying a third package, as many of these humble, unlovable wafers, wedged into a bottom shelf in your grocer’s cookie section will inevitably arrive broken), though in the future I may toy with whipped cream flavorings from mint extract to raspberry liquor. Or homemade chocolate wafers. But there’s no reason for you to be that kind of crazy; I’ve got more than enough for all of us.

Update: Want to make your own chocolate wafers for this cake? Now you can!

In a large bowl, beat cream, sugar and vanilla with an electric mixer on high speed until soft peaks form.

On a flat serving plate, arrange 7 cookies side by side in a circle, keeping 1 cookie in the center.

Spread with 1/2 cup whipped cream, making a 7-inch circle. Repeat with remaining cookies and cream, making 11 layers of cookies and ending with a layer of cream (there will be a few cookies left over). Cover with plastic wrap and refrigerate overnight.