Here’s a thing I’ve been doing since the year began that’s made me very happy in the kitchen and it’s so simple, I completely expect you to roll your eyes at how un-revolutionary it is, but it goes like this: Find a recipe that sounds good to you and make it immediately. Don’t put it in the queue; don’t save it on that to-cook-one-day list, just dive in and dig in. So far, it’s been nothing but great; there was a giant egg bake, ugly cookies, green dinner pancakes, a giant cabbage casserole (recipe added!) we heaped on coarse mustard-slathered bread and a towering spaghetti frittata. And while all of these things have been delicious, what’s been the most fun about them is getting back to a kind of impulsivity that’s gotten pushed to the wayside in this hyper-scheduled so-called adult life. It’s also led to conversations I want more of in 2016, such as “well, if you’re around anyway, why don’t you stay for dinner and I’ll guinea pig a new recipe on you?” 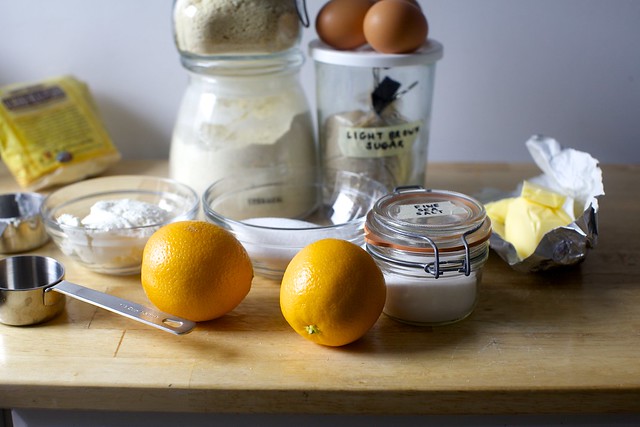 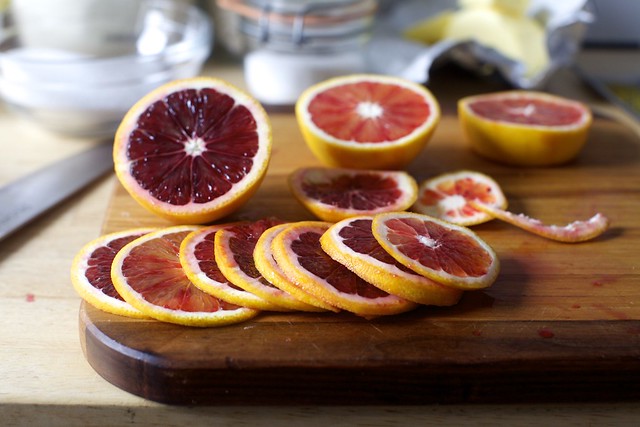 Which is how it happened that I spied a photo on the Instagram account of Elisabeth Prueitt of Tartine Bakery — someone I’ve long admired for both her baking talent and her refreshingly honest talk about being a working parent — last weekend that may not have normally been the kind of thing that got me running to the kitchen (a gluten-free cake, candied citrus rings, plus didn’t I just recently make a citrus-infused ricotta cake?) but why think too hard about it? And, lo, I’m so glad we didn’t. 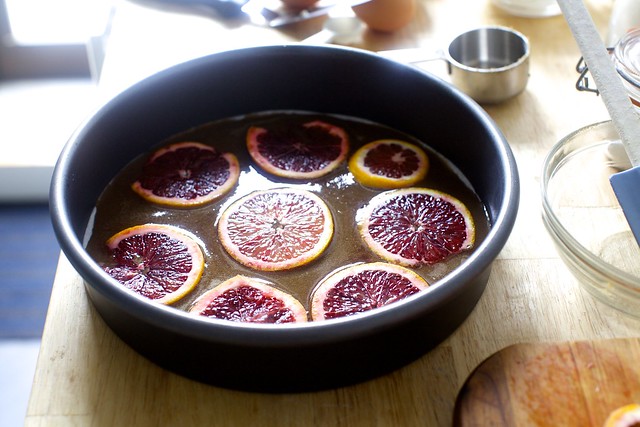 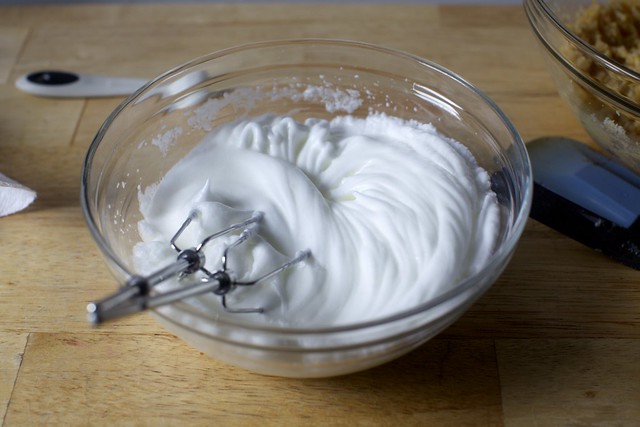 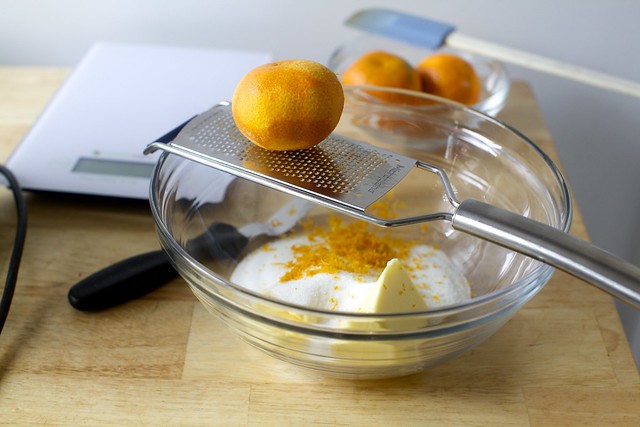 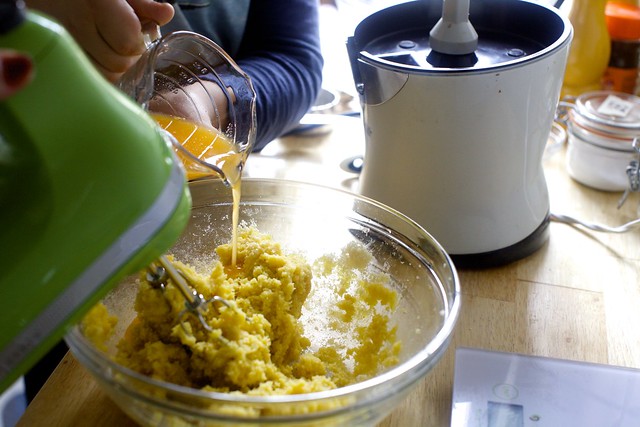 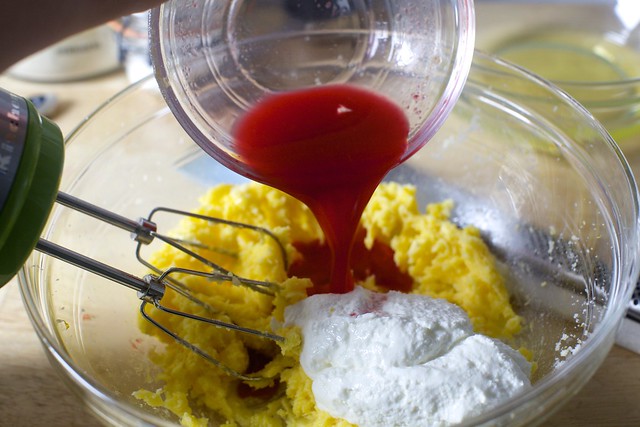 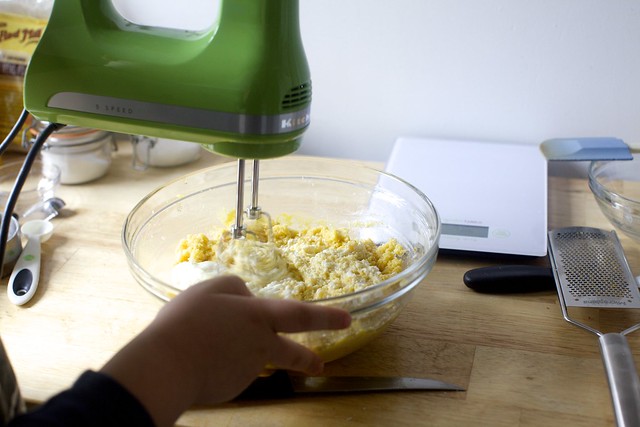 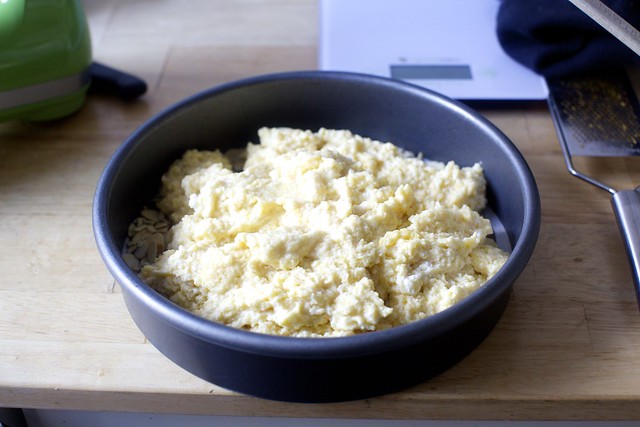 The recipe hails from the wonderful River Cafe Cookbook series, specifically the Classic Italian volume, and in its original format uses a mix of polenta and almond flour, whipped egg whites, butter, ricotta and lemon to make a thick cake that’s nothing like the dry cornmeal cakes you might have had in the past. In fact, it’s so tender and rich, you might almost mistake it for a ricotta cheesecake (Prueitt attributes this to the lower baking temperature). But what really caught my eye was Prueitt innovations; she uses a half-volume of the original for a thinner, delicate cake that she caramelizes orange slices into the reversed cake. The first time we made it with tangerine zest and juice instead of lemon, and sliced almonds as a topping. The second time, I had nabbed some blood oranges and made it with the zest, juice and candied rings, and nothing but almond flour. Both were probably the best-received dessert I’ve made that didn’t involve chocolate, peanut butter or salted caramel and so pretty, they might be the literal opposite of this gray frigid morning of snow flurries. 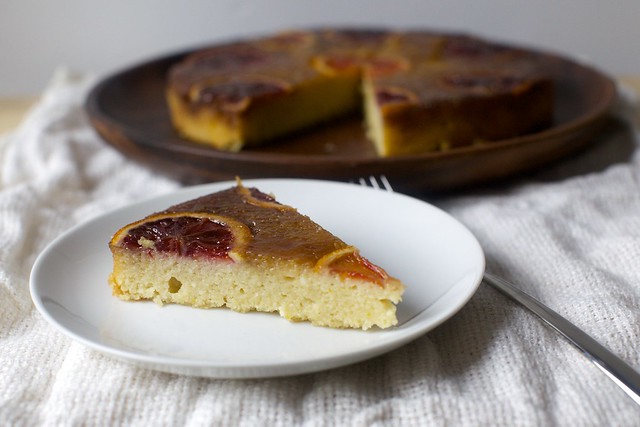 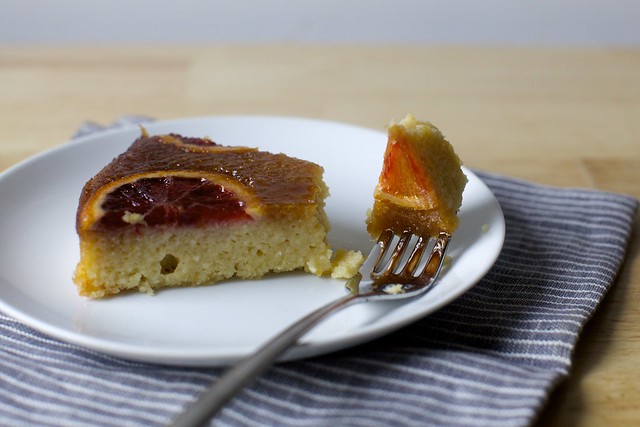 The River Cafe original calls for both the cornmeal and almond flour listed here. I’ve made it this way and I’ve also made it with all almond flour (i.e. an extra 1/3 cup), and both were wonderful; the latter makes it Passover-friendly. I haven’t made it with all cornmeal (for nut allergies), but suspect it wouldn’t be disastrous. If bittersweet lightly candied orange slices are not your thing, and they are not many people’s thing, you can either skip the whole brown sugar puddle upside-down thing (this was Prueitt’s innovation, not in the original; I find her method of making an upside-down cake with no caramel step utterly brilliant) or do as we did in our first round, just cover the sugar with toasted thin almond slices. If you are going to use orange slices, make sure you slice them paper-thin with your sharpest knife. We used blood oranges, other oranges will work too; the original recipe calls for lemon zest and juice. If using measuring cups, be sure to pack your almond flour. The difference between scooped and leveled almond flour and packed almond flour is significant.

A few other rearrangements: always zest before juicing, to avoid bad moods. Zest should always go straight into sugar, for maximum flavor release against the grit. Always whip egg whites before egg yolks, so you don’t have to wash your beaters in the middle of prep.

Heat oven to 300 degrees F. Butter a 9-inch round cake pan and line the bottom with a round of parchment paper.

Stir brown sugar and water together so they form a thick slurry. Pour into prepared cake pan and spread thin. Set aside.

Whip egg whites in a medium bowl with an electric mixer until they hold thick peaks. Set aside.

Place granulated sugar in a large mixing bowl. Finely zest both oranges over it.

Cut both oranges in half. Cut one of the halves into paper-thin slices and arrange slices over brown sugar base in cake pan. Juice other three halves (I had about 1/3 cup juice) and set juice aside.

Add butter to zest and granulated sugar in large mixing bowl and beat with an electric mixer (you can use same beaters you just did for egg whites) until light and fluffy. Add egg yolks, one at a time, and beat to combine. Add juice and ricotta; mix until smooth. Sprinkle salt over batter, then add almond flour and cornmeal and mix until just combined. Gently fold in egg whites.

Scoop batter in large dollops over prepared cake pan base. Gently spread batter flat, trying not to disturb orange slices underneath. Bake in heated oven for 35 to 40 minutes [updated to warn that this took longer for many people, but remains accurate for my oven– better to check early than late], or until a toothpick inserted into the center comes out clean and then (my preference) for 5 more minutes. The final cake is so moist, almost damp, I found the extra baking time beneficial.

Cool cake in pan on rack for 5 minutes, and then run a knife around the side and invert onto a cake plate. If any orange slices don’t come out easily, just gently arrange them on the top of the cake. If desired, heat jam until loose and brush over cake top for a glossier finish. Let cool and cut into slices. This would be delicious served with an extra dollop of ricotta, creme fraiche or barely sweetened whipped cream. The cake keeps at room temperature, but we prefer it from the fridge.