Last Valentine’s Day, Alex and I had dinner at Prune. We had the most decadent meal, but I couldn’t help but go home with the nagging feeling that I had ordered from the wrong side of the menu. You see, chef Gabrielle Hamilton’s menus are an editorial delight, and Valentine’s Day was one for the ages. 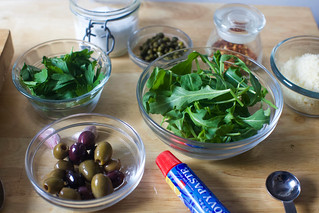 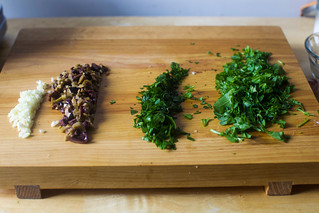 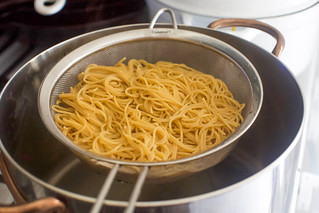 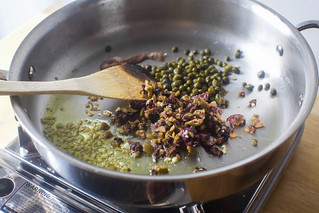 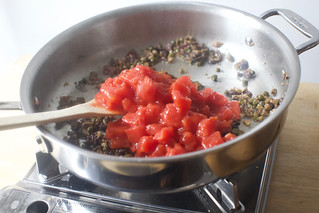 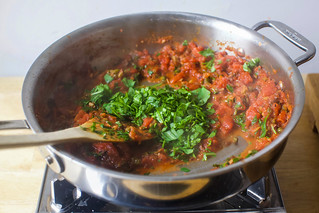 The Lovers’ Menu from which we ordered had all sorts of rich and spectacular foods, including homemade chocolate kisses (with tissue paper messages) dolloped out by a friend of mine who was working there as a pastry chef at the time. But the other side, the Cynics’ menu–with its Broken Vinaigrette, Whore’s (Puttanesca) Pasta, Cold Shoulder of Pork and Coffee and Cigarettes, oh and at half the price–well, it was evident that the bitter folks were having more fun. Really, it’s not the first time. Because my Valentine and I have a sense of humor (and also due to my inherent dislike of Special Romantical Menus in general) I couldn’t resist my own recreation of a Not Really Cynic’s Menu Thursday night: Pasta Puttanesca and a Bitter Salad with Broken Artichoke Hearts. 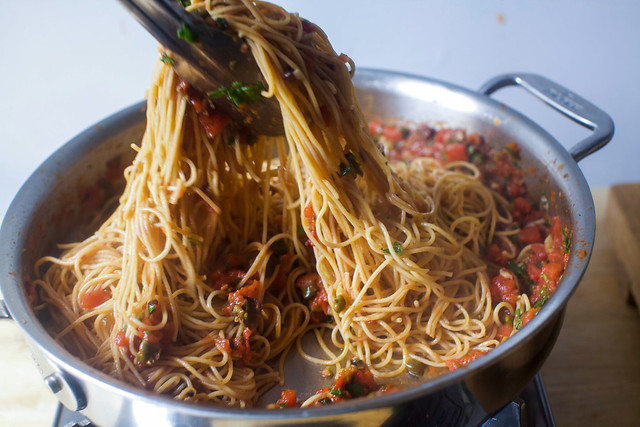 There’s something alluring a tangly nest of spaghetti, whether or not one uses it as a path to each others face. Spaghetti with a spiced and briny sauce and back story, however, trumps Disney every time. As the story–or one of the stories–goes, prostitutes used to make a heated, aromatic puttanesca dish to lure customers back in the day–it was quick, easy and inexpensive and yes, for the sake of this story I am only talking about the sauce. Another version of the story says that it was not the favorite of prostitutes, but women who wanted to keep their meal prep short so their evenings could move onto other things. Yes, well. So. 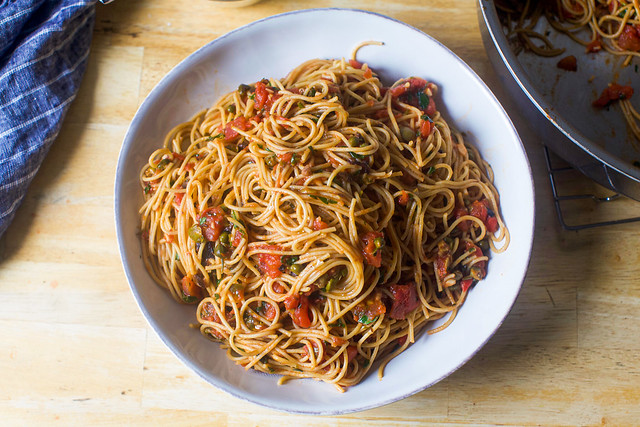 Nevertheless, it’s hard to argue that the dish isn’t perfectly suited for a homemade meal for two–it’s not exceedingly heavy or unhealthy, it can be made largely from ingredients already in the pantry and it doesn’t take very long to put together–in fact, the sauce can be cooked in the time it takes the pasta to boil. And since I have already waxed well beyond an acceptable word count about my love of artichokes, I suppose it goes without saying that I can’t imagine a so-called special meal not involving at least one format of them.

And in less than 45 minutes, we had dinner. We drank wine some friends had been kind enough to leave at our place, as if they knew we’d forget to pick some up and gawked at Lost. What more could we want?

Bring a large pot of salted water to a boil, add pasta and cook according to the directions on the package.

While the pasta is cooking, heat the oil in a large skillet over a medium flame. Add the garlic and saute until fragrant, about 1 minute. Add the parsley, olives, capers, anchovy paste, oregano and crushed red pepper to the skillet, and saute for 2 minutes more. Add the tomatoes and simmer for about 5 minutes. Stir in the arugula and simmer for 1 minute more, until the greens wilt slightly.

When the pasta is done, drain it and add it to the skillet, tossing it with the sauce to combine. Top with grated cheese.

Carve out the artichoke hearts (the drama!): Halve one lemon. Remove all leaves from the artichokes, including the dark outer ones, the lighter yellow interior leave and the thorny purple/pink ones near the heart. Rub all exposed areas with a lemon half. Trim the stalk, cutting down the length of it to about one inch and shaving off any dark green nubs or imperfections–rub lemon on this too. Trim the dark green stumps the leaves have left behind, again, coat this with lemon. Using a paring knife or grapefruit spoon, remove the fuzzy choke completely, then squeeze some lemon juice over the heart. Save the mostly used-up lemon halves. [Becks & Posh have an excellent step-by-step tutorial on this process, with pictures, for those who want further instruction.]

Bring a small/medium saucepan 2/3 to boil with enough water to cover the artichokes, the glug of white wine, smashed garlic gloves, a couple pinches of salt and the not-discarded lemon halves you’d used in the first step. Once it is boiling, add the prepared artichoke hearts. Boil them for about 20 to 25 minutes, until they are tender. (The tip of a sharp knife should easily go through them.)

Drain the artichoke hearts and toss them with juice of the second lemon while they cool. Set them aside, briefly. Meanwhile, make your dressing in the bottom of your salad bowl, whisking all vinaigrette ingredients. Thinly slice your radicchio and endives and toss them with the vinaigrette. Lightly smash the artichoke hearts that have been set aside, and toss these in as well. Season with freshly ground black pepper to taste.