Look, I understand that it’s too in the day early to start talking about mothers. And, at the age of 30, when I say mother, what I really mean is “me, sooner than later” so it sounds a particularly ill-chosen term, not to mention that my mother is a wonderful cook, as is my husband’s mother as was her mother and what I really actually mean is “this is not your (fill in the blank) deli’s/lunch room’s typical, watery/soggy/oily/white/mysterious two-ounce Solo container of forgettable and soon-to-be-chucked coleslaw.” But that makes for a terrifically bad headline.

Like most of us, I’ve never been a fan of coleslaw, as nearly every one I had ever tried was god-awful. I thought it was because I didn’t like cabbage, but this has turned out not to be the case. Then I thought it was because I didn’t like mayonnaise, but this, too, turned out to be a farce. (An aside: have you ever made mayo? It’s really easy! We should totally do it some time.) As it turned out, it was coleslaw, the way it is typically prepared (read: scooped from bucket of mysterious origin and packing date), that I loathed. Ding, ding, ding; we have winner! 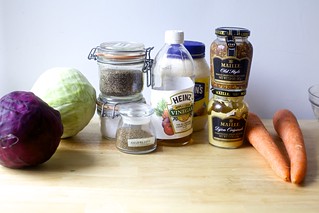 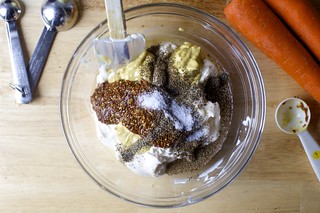 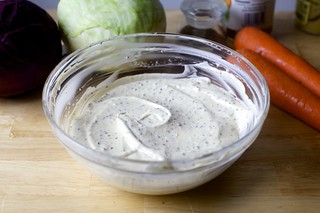 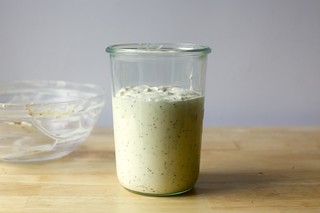 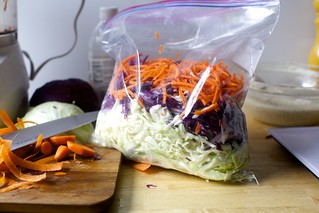 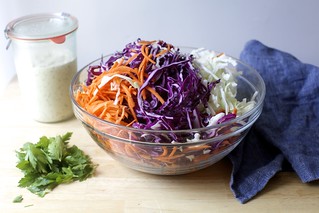 As is an all-too-common theme on this site, Ms. Contessa saved the day with her fresh take on everything you’ve grown bored with. Don’t think coleslaw, think cabbage salad. Don’t think white, as these pictures show it to be anything but. Soggy? No, the trick is to keep the dressing and the veggies separate, as you would with any other salad. Dull? Heck no. Forgettable? Anything but, though you’ll have to try it for yourself to believe me. Now, the recipe does makes an excessive volume of dressing, but it keeps forever (or, as long as that jar of mayo does), and doubles excellently as a dip for raw veggies. In addition, cabbage, when bought fresh, keeps for weeks and week in the refrigerator. (I wasn’t going to bring this up, but we used a half-head to make this in June, and in August, found the remainder wrapped, flawless, unbruised and age mark-free, in the back of the crisper. I’m going to leave the jury out on whether we dug in.) 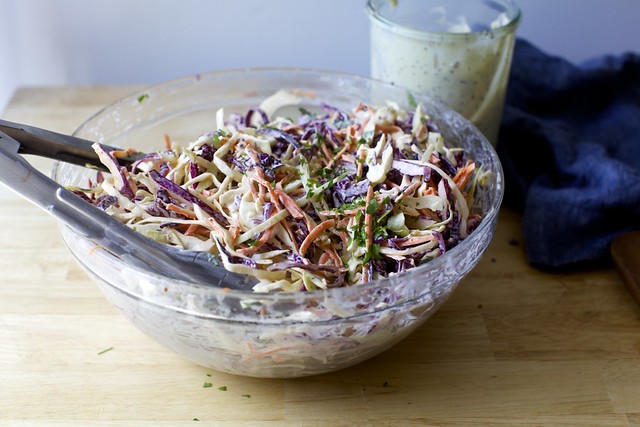 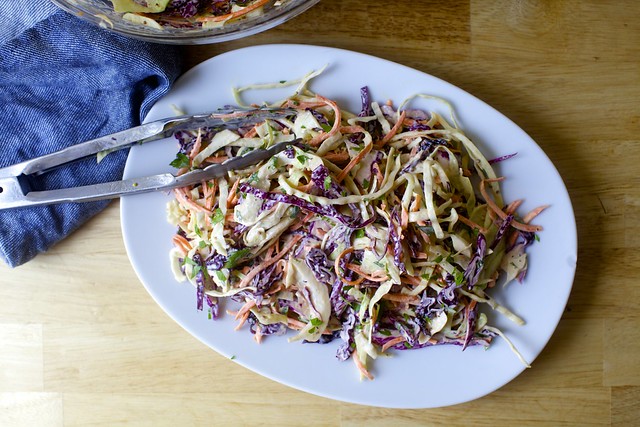 Not Your Mama's Cole Slaw

Here’s how I get this salad ready for picnics, potlucks, and other summer flings: I prepare the cabbage and carrots and keep them in a big container or gallon bag. I make the dressing and keep it in a big jar. And when needed, I assemble what we need with chopped parsley. The parsley doesn’t add a significant flavor, but it does make the salad look like a show-stopper. You could also use ribbons of kale for a modern twist. I don’t use the blue cheese as often, but if you’ve got friends and family who like it, they will love it here.

The prepared vegetables without dressing will keep for 5 days in a bag. The dressing without blue cheese keeps… well, I can’t say forever, but there’s honestly not one thing in there that shouldn’t keep for a month or two. We keep it in an airtight jar in the fridge. With blue cheese, I’d use it within a week.

This makes too much dressing for this quantity of salad, we have never used it all. But it keeps well (see above) and also makes an awesome dip for crudités.

Refreshed in 6/17: With fresh photos, weights, and more detailed notes.

Make the dressing: Mix the mayonnaise, mustards, vinegar, celery seed, salt, and pepper in a smaller bowl. Stir in blue cheese, if using.

Prepare the vegetables: Halve the cabbage halves and cut out the cores. Slice the cabbage as thinly as you can with a sharp knife, on a mandoline, or with a food processor’s slicing blade (lay the cabbage horizontally in the feed tube). Transfer chopped cabbage into a large bowl, fishing out any very large pieces and slicing them thinly by hand. Stir in the shredded carrot. If you’re going to dress this later, this is the best stopping point.

To serve: Up to an hour before you’ll eat the slaw, toss the cabbage mixture with dressing to taste –- you will want to start with half and add more as needed — and parsley. Adjust seasonings as needed.

Note: No matter how gargantuan the salad looks right now, it will soon wilt down a bit and yield moderate portions for 8 to 10 people.

98 comments on not your mama’s coleslaw