Prior to a few months ago, the full extent of my understanding of churros was: 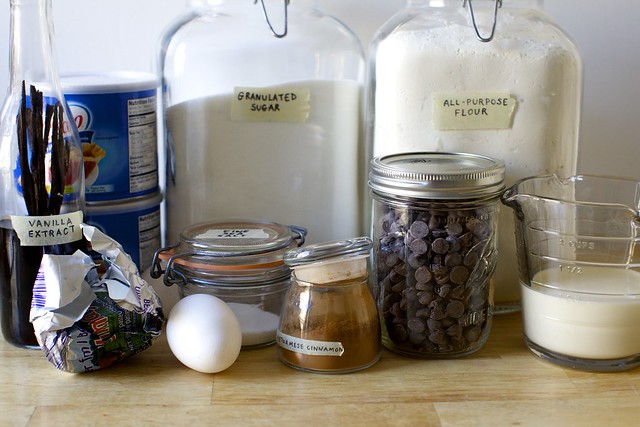 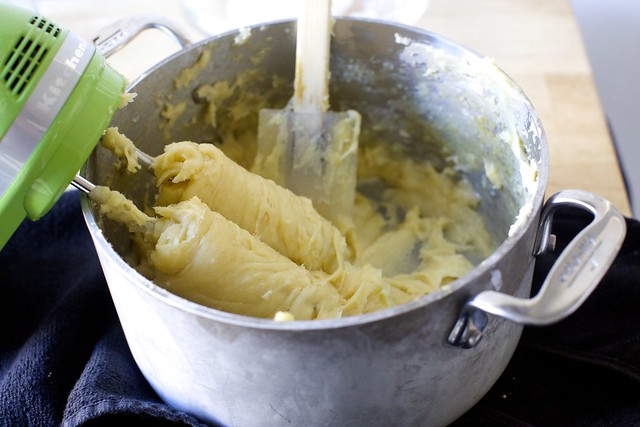 This week, set out to disprove all three. Well, the first notion began to unravel a recently as we chomped through a plate of them at Rosie’s, a newish restaurant in my neighborhood, when I realized for the first time that these long, ridged doughnuts weren’t your usual cake or yeast doughnut texture inside, but something else — almost custardy within, very crunchy outside, as if they were made from an eggy, puffy dough. Google confirmed my a-ha moment: did you realize that churros are basically long, piped and fried eclair/cream puff dough? 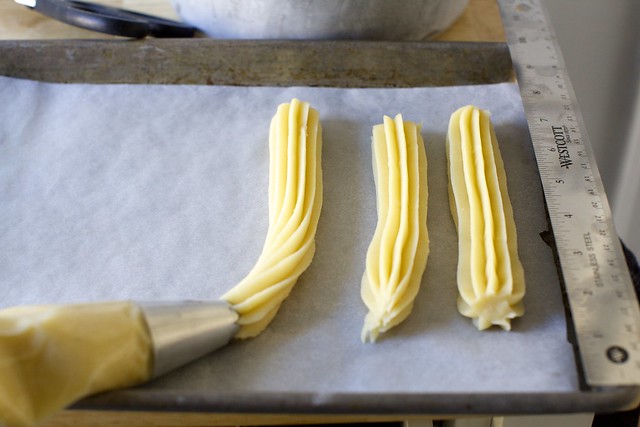 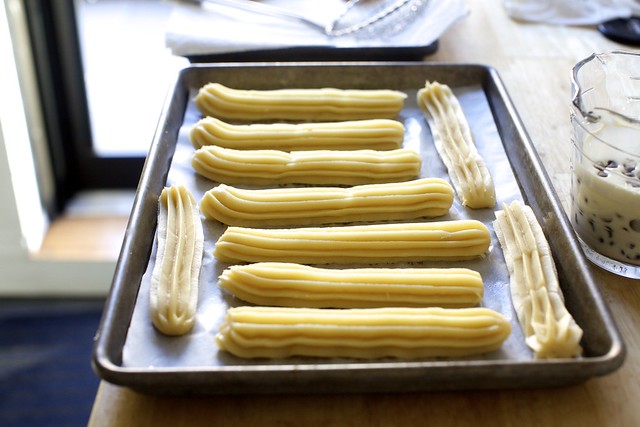 This means (Item 2) that they’re not actually difficult to make, but a paste of flour and water with a little butter, sugar and flavoring that you beat eggs into. This also means the universe owes me an explanation of why they’re not as popular here as they are in South America, Spain and Portugal. Could you imagine the stampede around a Midtown coffee cart not selling those sad puffy doughnuts and bready bagels but these instead? Like, I’m actually angry this doesn’t exist yet. 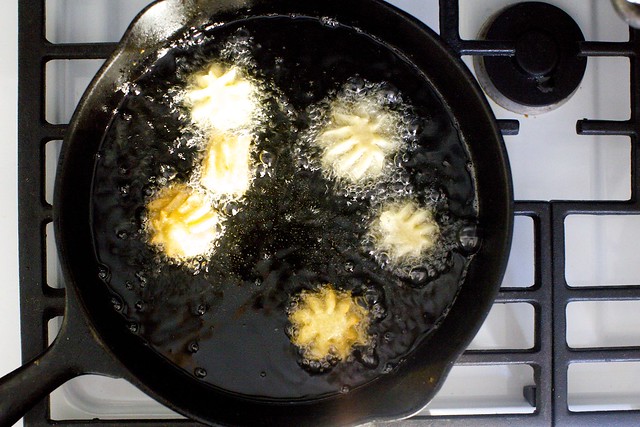 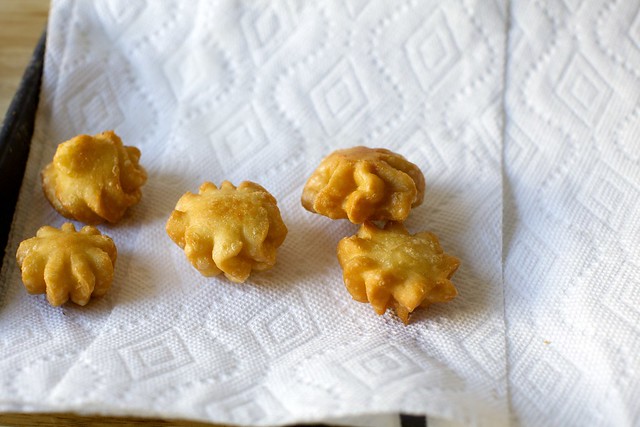 This left only the last concern. “Why haven’t we ever made churros before?” I asked my husband. “Why haven’t you!” he responded with righteous indignation. “Because I’d eat them all and then complain about my chins?” “Not if I got to them first.” “We could make them and try to get rid of them before they caused permanent damage.” “You better not give them away.” As usual, he was a total instigator and exactly no help in talking me out of this. Whose side is he on? 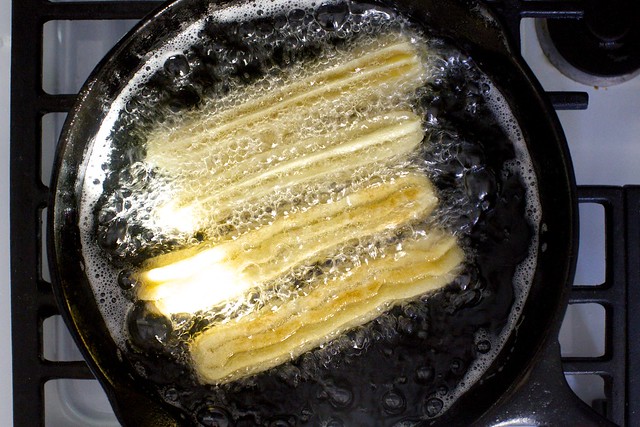 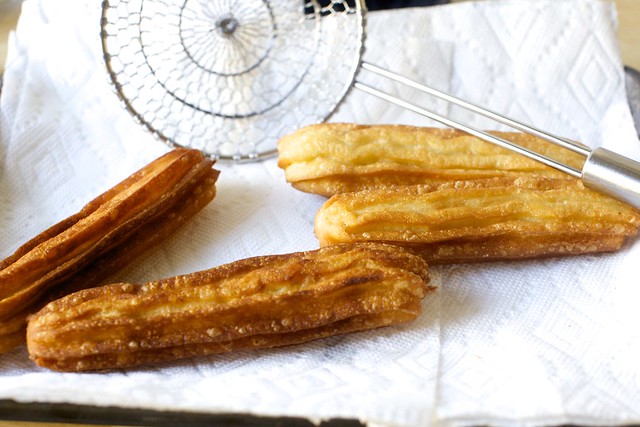 However, as I began to sift through recipes a few themes emerged, mostly related to the difficulty of deep-frying things at home: it’s rather easy for them to overcook and get unpleasantly hard outside or undercook and seem eggy and loose inside. Some recipes called for frying at 400 degrees, which seemed a recipe for a smoky disaster, others had comments like “this needed 9 more eggs than the 1 called for to work.” I ran in the other direction. The other issue seemed to be that they can be really hard to squeeze the thick dough out the piping tip, which if doing so over a cauldron of boiling oil, would be incredibly stressful. Frying is stressful enough. 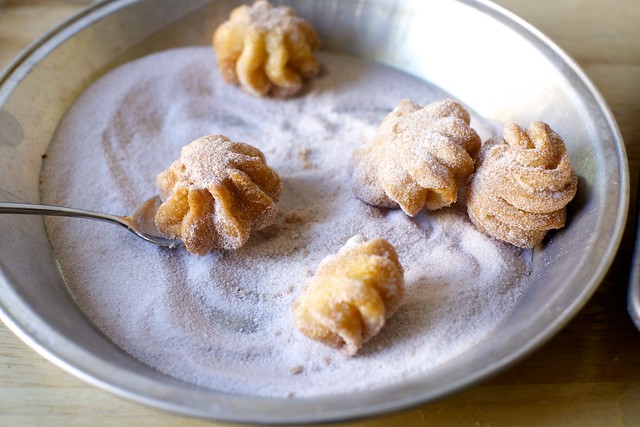 As if it was in my head, it turned out that Cook’s Country tackled these exact concerns in a recipe this month. Their solutions are as logical as you’d imagine — to help keep the heat at the right level, always drop the churros in at the higher end so there’s room for the temperature to drop without it going too low. And, they suggest piping out the dough while it’s still warm and easier to manipulate, onto an oiled tray pretty much at your leisure. You can then keep this tray in the fridge for an hour or so, but I bet up to a few, which would be awesome if you want to be a total show-off at your next dinner party. 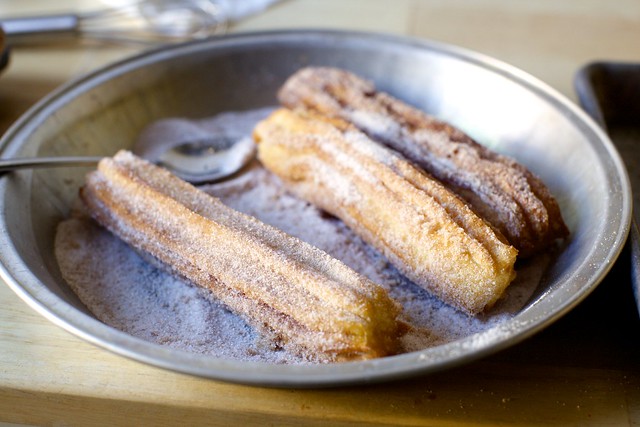 The results are churros that are dangerously easy to make but also surprisingly filling — there’s a real heft to them, and thank goodness, because it makes it easier to stop at one. Well, stop at one, leave the apartment and not come back until several hours later when there are only a couple left and then pat yourself on the back for your self-control. Same thing, right? 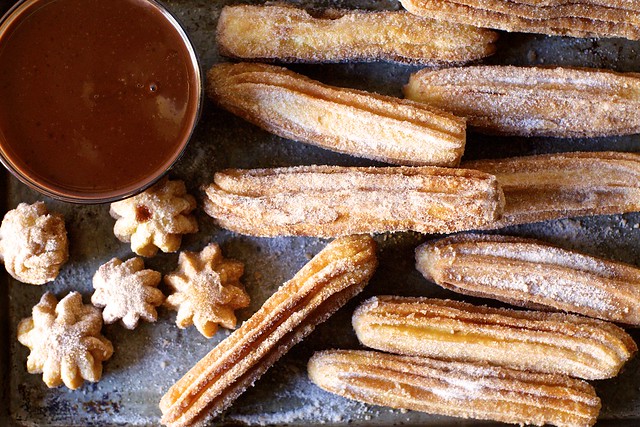 The recipe here creates a pretty standard cinnamon sugar-crusted churros with a puddle of chocolate — halfway between a chocolate sauce and a very rich, concentrated cup of hot cocoa — to dip it into. While you can fry without a thermometer and just keep an eye on things, as churros have a tendency to either overcook on the outside or undercook on the inside, you’ll find it easier with one.

P.S. Want to have even more fun with these? Make some homemade dulce de leche or cajeta to dip them in.

Make the dough: Heat water, butter, sugar, vanilla and salt in a medium-size saucepan until simmering and butter has melted. Remove from heat and dump in flour all at once. Mix vigorously with a spoon until the mixture forms a smooth ball and no floury bits are visible.

Let cool 5 to 10 minutes, then add eggs, one at a time. You can beat them in with a large whisk and strong arm, or use a hand- or stand mixer. Be warned that the dough really likes to ride up the beaters of a handmixer, so keep it pushed down.

Transfer churros to a pastry bag or strong gallon ziploc bag with a corner snipped off, fitted with a large closed star tip — Cook’s Country recommends a #8 pastry tip, 5/8-inch in diameter but I might have preferred a slightly smaller one so they were less thick.

If you’d like to make them the traditional way, you can skip right to the frying stage and pipe the churros in 6-inch or desired lengths (I played around with some blob-shaped minis) right into the oil, snipping them off with scissors at your desired length. But I found it a little easier to pipe them while still warm onto a large baking sheet that had been lined with parchment paper and sprayed lightly with a nonstick spray, so I was in less of a rush. If using this method, transfer the tray of shaped churros to the fridge for 15 minutes and up to a couple hours to help the shapes set before frying them.

Cook the churros: Heat oven to 200 degrees to keep churros warm while you fry them in batches. Line a large plate with a couple layers of paper towels. Add oil to Dutch oven or cast iron skillet until it measures about 1 1/2 inches deep and heat over medium/medium-high heat to 375 degrees.

Gently drop a few churros at a time into the oil and fry until deep golden brown on all sides, which will take about 6 minutes. Turn them frequently so that they cook evenly. Adjust heat as needed so that the oil does not dip below 350 degrees. Once churros are cooked, remove from oil and drain on towels for a minute before transferring to a tray in the oven to keep warm. Return your oil to 375 degrees before adding more churros. Repeat with remaining dough.

Coat the churros: Once all churros are fried, combine cinnamon and sugar on a plate. Roll warm churros, one by one, in sugar to coat, spooning more cinnamon-sugar on as you do for best coverage. Tap off excess. Do not let warm churros sit in cinnamon sugar for longer than needed to coat or the sugar will get clumpy.

Make the sauce: Heat cream, chocolate and salt in a bowl in microwave in 30 second bursts, whisking between them, until chocolate has melted.

Do ahead: Choux dough, the style of dough used here, can be made and kept in bowl for up to a day before using, but it will be easier to pipe when it’s still warm. Piped raw churros should be good in the fridge for a few hours, but I haven’t tested it for a full day, though it stands to reason they’d keep that long too. Churros can be kept warm in oven before coating with cinnamon sugar for probably up to an hour before they might get dry. They’re best on the first day.