Over the last couple years — a dark time in which I’ve slowly had to accept that my once-tiny baby with fairly simple needs now required real square meals at very specific times of the day, such as dinner, far earlier than we ever do and that he’d likely be looking to me (me!) to provide them or face the hangry consequences — I’ve attempted to increase my repertoire of two things: 1. Dinners that can be made easily in under an hour that I actually want to eat, and 2. Casseroles. No, no, I don’t mean the canned cream of soupiness things. I mean, the idea of taking disparate meal parts and baking them in a big dish until they’re much more than the sum of their ingredients. Plus, they’re dinnertime magic: they reheat well; they make excellent leftovers for as long as you can stretch them; and they rarely require anything more on the side than a green salad (for grownups) or steamed broccoli (for people who haven’t yet come around to salad). Long Live The Casserole Rethought With Minimally Processed Ingredients! is hardly a sexy catchphrase, but there you have it: my new battle cry. 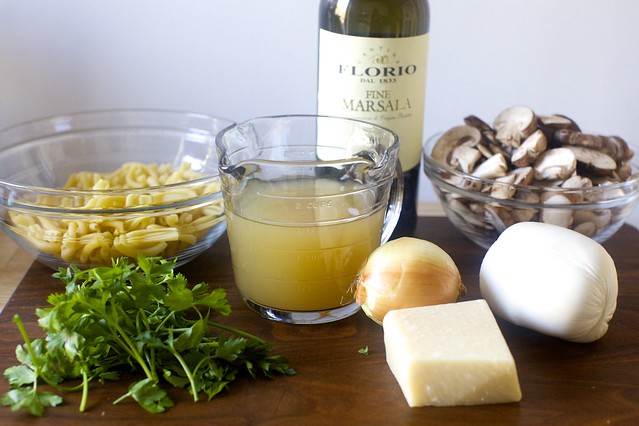 In the first category, Alex’s Chicken and Mushroom Marsala from 2008 in the archives became a favorite again in 2013 when I began making it much more quickly with thigh cutlets. Within the second, I’ve been trying as best as I can to reimagine baked pastas into dishes that are less of a cheese-valanche and more of an insanely good flavor assault with a sizable portion of vegetables within. (See also: Baked Orzo with Eggplant and Mozzarella and our previous house favorite, Baked Pasta with Broccoli Rabe and Sausage). 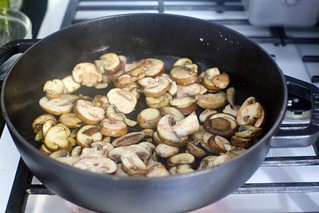 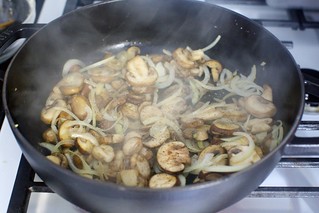 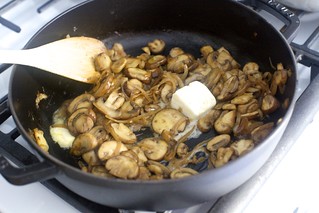 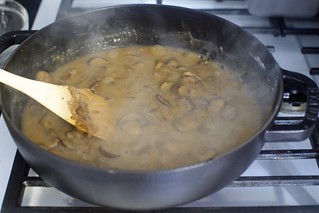 On Sunday, these two dishes collided deliciously as I attempted to take my favorite part of chicken marsala, that incredibly rich, intensely flavored mushroom sauce, and tangle it with al dente noodles, mozzarella and a crunchy parmesan lid to make a baked pasta that became instantly our new favorite. Seriously, if you come over for dinner this winter, prepare to be served this. This couldn’t be further from the jarred red sauce, grainy ricotta, overcooked-to-collapse ziti most of us associate with baked pasta and it’s not sorry at all. 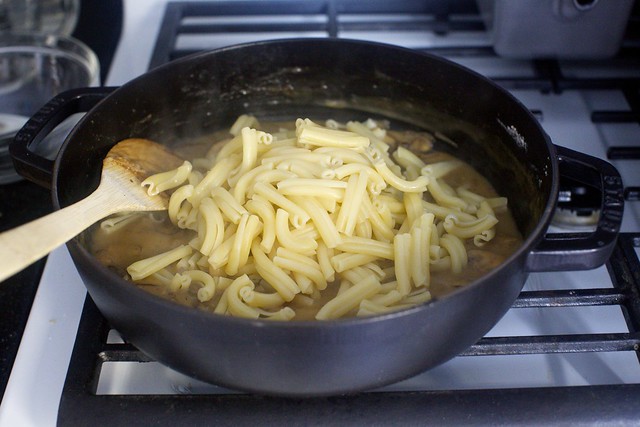 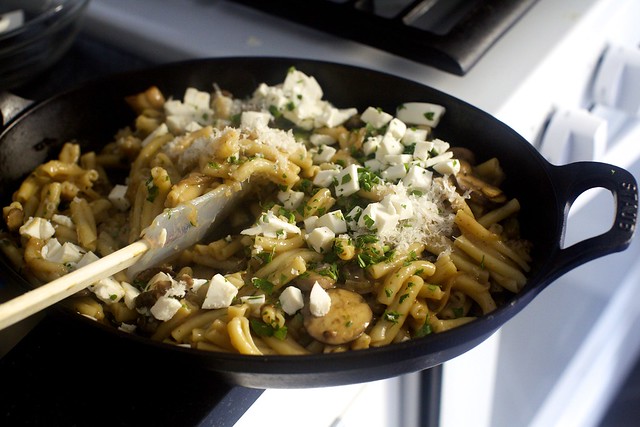 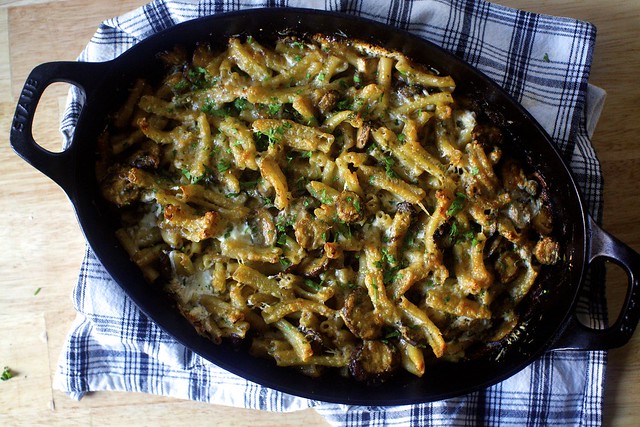 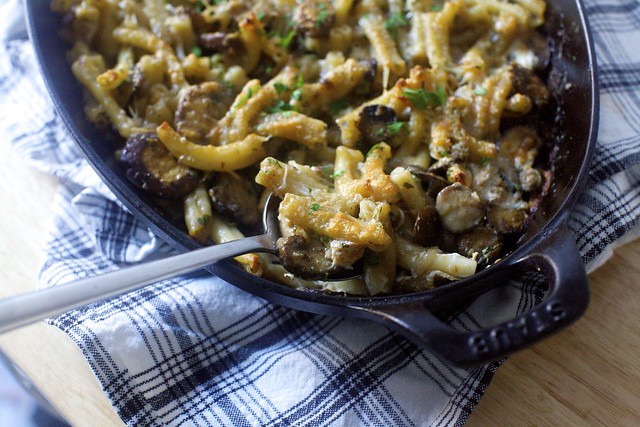 Unrelated: Out of curiosity, as ’tis the season and all, how long does it take you between “thinking you might be getting sick” and “admitting that you are really, actually sick?” I mean, I guess we all should all know from life thus far that the key to returning to the Land of the Fully Functioning and Unmiserable is to make this gap is as narrow as possible, so you can get on with the bone broth/day sleeping/Good Wife bender portion of your illness and hasten recovery along, but we rarely do it, right? Because it might sort out on its own? But for the first time ever, I narrowed this gap to a mere 36 hours this weekend and when a doctor told me Saturday afternoon that I had not, say, swallowed razor blades but caught strep throat (again, seriously), I actually wanted to high-five myself because as completely terrible as it feels, it’s curable. Antbiotics fix it. And, lo, by Sunday afternoon I was not only high-functioning enough to decide out of the blue to Old English all of our furniture (my husband thinks they may have accidentally laced my meds with Domesticity), I was hungry and eager to cook again. This, specifically. Pasta: A friend to achy throats, hurrah.

And for the other side of the world:
Six Months Ago: Brownie Ice Cream Sandwiches
1.5 Years Ago: Grilled Bacon Salad with Arugula and Balsamic
2.5 Years Ago: Bacon Corn Hash
3.5 Years Ago: Whole Wheat Raspberry Ricotta Scones

A tip: If we play our cards right here, this can be made entirely in one dish. I used a 4-quart Staub braiser (Happy Hanukah to me!) but any 3-to-4 quart stovetop-to-oven type dish will work.

Cook the pasta: Bring a pot of well-salted water to a boil. Add pasta and cook until al dente, about 1 to 2 minutes before perfect doneness. Drain and set aside.

Make the sauce: Reheat your empty pasta pot over high heat. Add oil and once it is hot, add mushrooms and cook until they’ve begun to brown and glisten, but have not yet released their liquid. Reduce heat to medium-high, add onions, salt and pepper and saute together until the liquid the mushrooms give off is evaporated. Add Marsala and cook mixture, stirring, until it has almost or fully evaporated (depending on your preference). Add butter, stir until melted. Add flour, and stir until all has been dampened and absorbed. Add stock, a very small splash at a time, stirring the whole time with a spoon. Make sure each splash has been fully mixed into the butter/flour/mushroom mixture, scraping from the bottom of the pan and all around, before adding the next splash. Repeat until all stock has been added. Let mixture simmer together for 2 minutes, stirring frequently; the sauce will thicken. Remove pan from heat.

Assemble and bake dish: If you’re cooking in an ovensafe dish, add cooked pasta and stir until combined. (If you’re not cooking in an ovensafe dish, transfer this mixture to a 2-quart baking dish.) Stir in half the parmesan, all of the mozzarella and two tablespoons of the parsley until evenly mixed. Sprinkle the top with remaining parmesan. Bake for 25 to 30 minutes, until edges of pasta are golden brown and irresistible. Sprinkle with reserved parsley and serve hot. Reheat as needed.

A bunch of notes: