Barely two weeks ago, I used the following phrases to describe soup: “vegetables boiled to death,” “assaulted with too much cream,” “whatever healthy things in there cannot be tasted,” and even “what must have been a practical joke” about an especially awful one I’d ordered recently. I admitted that I found soup boring, and my relationship to it has been on especially unstable terms this year after repeated disappointments.

We then proceeded to eat soup for dinner for the next 14 days. What happened? It turns out that baked potato soup is a gateway drug, in that when we finished it, we wanted more soup. Different soup. We swore we could stop any time we wanted, but three batches of soup later, we realize we might have underestimated the power of good soup, the kind that is filling but also freeing of the nightly “What’s for dinner?” because, it’s already made and only needs to be reheated. I’ll admit that the fear of The Swimsuit when we go on vacation in a few weeks may have also egged on this habit, but it was the soup — come on, you know you wanna! — that really kept us engaged.

After the potato soup, we moved onto a tomato-y cabbage soup that we enjoyed, but I can assure you that the recipe isn’t ready for prime time and black bean pumpkin soup, one of our all-time favorites from the archives. And then this weekend, I attempted to recreated the kind of mushroom barley soup I grew up eating. Except, no offense ma, this is much much bolder. 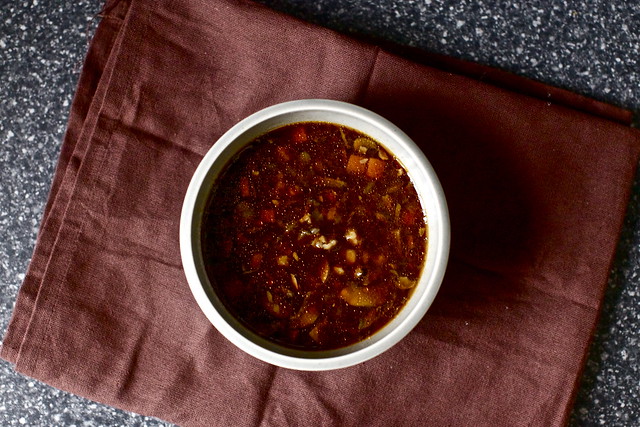 It starts with soaking dried porcini, which, understandably, is the start of something wonderful as they pack so much flavor in what looks in the store like wood chips. I blame my German half for my affection for beef broth (I don’t think my grandmother used chicken broth once in her life, even for matzo ball soup), and the combination of beef broth, porcinis, their soaking liquid, brown mushrooms and the tomato paste I snuck in there makes for a soup that literally smacks you in the face (or perhaps knocks you off your stool) with flavor. The farro (which I used because I was out of barley, but either work, as will spelt) gives you something nice to bite into, and gives it more of a main-course feel and should I want to make more of a stew-type soup, I might even double it next time.

Alas, a puddle of brown soup is hard to make look like anything but. I was very tempted to swirl in a sherry cream or a dollop of dilled sour cream to pretty it up, and were I serving this for a dinner party or guests, I might. But there’s so much flavor, it doesn’t need it.

For the mushrooms, you can use white, brown/cremini, shiitake or a mixture thereof. But I use all brown/cremini almost every time.

Cover dried mushrooms with 1 cup boiling water, and set aside for 20 minutes, or while you prepare the rest of the soup.

Trim and slice fresh mushrooms, then give them a rough chop to your desired texture.

Heat oil in heavy-bottomed deep pot. Sauté onions and carrots over medium heat until onions begin to color, about 10 to 15 minutes. Add garlic, and sauté for 30 seconds. Add fresh mushrooms, and cook until they begin to release liquid, about 5 to 10 minutes. Raise heat and add barley; sauté until it begins to color (this didn’t really happen for me, because the mushroom liquid was still sloshing about). Add broth, sherry and tomato paste. Scoop the porcinis out of their soaking liquid (hang onto the liquid) and finely chop them. Strain the soaking liquid to remove any grit and add both this liquid and the chopped porcinis to pot. Season with salt and pepper, and simmer for about 40 minutes, until grains area tender. Stir in sherry vinegar; adjust seasonings and serve.

261 comments on mushroom and farro soup