I used to make a lot of quiches and savory tarts. I still think they’re one of the food Greats; a delicious, buttery crust and almost any filling you can think of. With a salad of mixed greens and some crisp-tender green beans with flaky salt, I’m not sure I’ve ever needed anything else to fill out a meal. Oh wait, a glass of wine. Now that there is some Deb Meal Bliss.

But as you know, things shift. They change. Suddenly, I’m feeding three mouths instead of two and I’m kind of hoping for leftovers and those delicate little tarts don’t stretch as far as I want them to. I want heft. I’m pretty at peace with not rolling out a pastry crust on a harried Monday afternoon.

If you’ve been hanging out in the comment sections lately, a dude named Ottolenghi has been coming up a lot. “Ottolenghi has an eggplant soup…” “I had something like this at Ottolenghi’s restaurant in London…” or more succinctly, “OMG I LOVE Ottolenghi.” It seems that a case of Ottolneghi Fever is going around and I’ve caught a fierce case of it, too. Yotam Ottolenghi is the chef/owner of four self-titled restaurants in London that I haven’t been to (sigh) but showcase food I can only describe as clever. Sure, they’re they’re all from scratch, wholesome, organic and locally sourced; all of those hashtags we go for today but more too: innovative, drawing influence from all over the Mediterranean, fusing ingredients together that you might not have expected to work but will think of nothing after you’ve tried them. Can’t make it to London? Don’t worry, he’s got a an addictive cookbook (fried beans with feta, sumac and sorrel, anyone?) and a weekly column in the Guardian called The New Vegetarian, an endless source of Exactly What I Want For Dinner Tonight.

Earlier this month, I bookmarked this funny-named dish he calls a cauliflower cake, part of his ongoing campaign to give cauliflower, which he considers as versatile as the beloved potato, “some well-earned glory”. With the better part of a dozen eggs, this at first reminded me of many of the quiche and tart fillings I used to whisk up, but what makes it different is the baking powder and quantity of flour. Sure enough, this makes a sturdy omelet that slices like a cake and works as a hefty main course. But rather than being humdrum, as big baked egg dishes can be, there’s red onion and parmesan aplenty and signature Ottolenghi cleverness like a springform lined with black sesame seeds, a bit of turmeric, minced rosemary and a big handful of basil. It’s unusual and completely addictive and contains magical powers that get 13 month-olds to stay still long enough to eat that entire slice you see above. 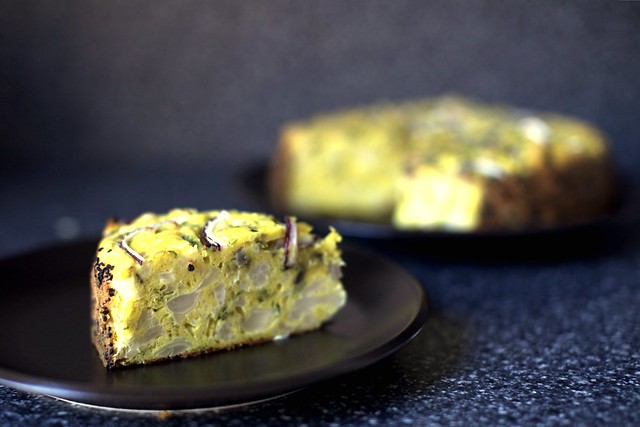 Cauliflower and Parmesan Cake
Adapted, only a little, from Yotam Ottolenghi

Ottolenghi suggests serving this “cake” (think: sturdy baked omelet) as a light dinner with a “makeshift salad of sliced cucumber, dill, mint, a little sugar, cider vinegar and grapeseed oil”. I say make a salad with whatever you’ve got on hand; I was messing around with brussels sprouts and green beans yesterday, so that’s what I made a salad from.

My main changes were to change the weights in the recipe into “American” with cup measurements where I could. He calls for 100 grams of olive oil, which works out to about half a cup, which seemed like a lot to me. I used a generous quarter-cup in the end. Should you use the whole amount, I am sure your cake will just be that much more moist. I also balked at using nearly half a pound of Parmesan (he calls for 220 grams, which is about 2 1/4 cup grated), and used about a quarter instead (1 heaped cup, grated). I might have enjoyed a stronger Parmesan presence so will be less stingy with the good stuff next time.

Preheat oven to 350°F (180°C) degrees. Break cauliflower into medium florets (this will cause less mess than chopping it). Place floret in a pot with a teaspoon of salt, cover them with water and simmer for 15 to 20 minutes, until quite soft. Strain and let drip in the colander for a few minutes so they dry and cool.

Meanwhile, prepare the batter. Halve your red onion and cut a few thin rings off the end of one side; set them aside. Coarsely chop the remainder of your onion. Heat all of your olive oil in a saucepan (I won’t tell if you use the one where you cooked your cauliflower) and saute the chopped red onion and rosemary together until soft, about 8 minutes. Remove from heat and allow to cool.

Whisk eggs and olive oil and onion mixture together. Stir in basil. Whisk flour, baking powder, turmeric, cheese, 1 1/2 teaspoons salt (use 1 teaspoon if you are nervous about this amount) and many, many grinds of black pepper together in a separate bowl and add to egg mixture, whisking to remove lumps. Stir in cauliflower gently, so most pieces remain intact.

Line the bottom of a 9-inch (24cm) round springform pan with parchment paper. Butter the sides generously. Put the sesame seeds in the pan and toss them around so that they stick to the sides. Pour in the cauliflower batter, arrange the reserved onion rings on top and bake cake in the center of the oven for 45 minutes, until golden brown and set.

Serve warm or at room temperature. Before you serve the cake, be sure to run a knife around the pan. This was probably the first time in my life I forgot, and several parts of the seed-crusted sides tore off!

320 comments on cauliflower and parmesan cake